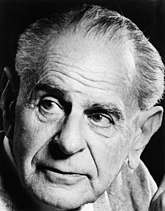 The avuncular face of Karl Popper in 1980.

Karl Popper (1902–1994) was an important figure in the philosophy of science.[1] He wrote his first book, the Logic of Scientific Discovery on what science is and how it works (in German) in 1934, and translated it to English in the 1950s. He doubled down on these ideas in his more famous work, Conjectures and Refutations. Popper argued that scientific theories can never be proven, merely tested and corroborated. Scientific inquiry is distinguished from all other types of investigation by its testability, or, as Popper put it, by the falsifiability of its theories. Unfalsifiable theories are unscientific precisely because they cannot be tested. His philosophy of science was generally well received by actual scientists.

While the logical positivists sought a demarcation between meaningful propositions and gibberish, Popper sought to distinguish science from non-science. It is important to note non-science in the previous statement. Falsifiability, according to Popper, only applies to science or claims with the pretense of being scientific. In this schema, unfalsifiable claims presented as science are in fact pseudoscience. However, not all unfalsifiable claims are pseudoscience; they may simply be un-scientific. For example, Popper also believed in the necessity of what he called "metaphysical research programs," which he claimed could contribute to science. Karl Popper initially declared the theory of evolution, unscientific, thinking it constituted a metaphysical research program. He later amended his views stating "I have changed my mind about the testability and logical status of the theory of natural selection; and I am glad to have an opportunity to make a recantation".[3][4]

Neither can viewing a great many white swans make "all swans are white" any more likely - some people in fact suggest the opposite, as these observations create an illusion of confidence in our hypothesis that can be highly detrimental. Each existential statement can be expressed as “at w,x,y,z point in space time there existed a non-white swan”, for all intents and purposes an infinite number of potentially falsifications and certainly a number we are unable to make a significant dent into by observations. (Bayesians may consider the prior probability of any universal statement to be extremely low as a result of the vast number of opportunities for falsification).

Verification, then, is simply off the menu. Falsification, on the other hand is both possible ("Hey guys! That swan is black!") and useful: we can discard theories we have discovered to be in error. As "verification" is an illusion science may only advance by means of falsification. It is therefore critical that science does not try to make its theories immune to falsification. For someone to be truly engaged in the scientific method, they need to imagine under what conditions their theories or views could be wrong. What circumstances could invalidate their theories? Most people don't like creating risky tests that could falsify their own beliefs because most people dislike being wrong, have preconceived notions about many things, and suffer from at least some degree of confirmation bias. One of Popper's disciples, Imre Lakatos[5] took these ideas and pushed them further, arguing scientific theories need to make "novel predictions". Anyone can predict that the sun will come up tomorrow or that there will be sand at the beach, scientists need to go further.

Karl Popper's theories about what constitutes true science were in part a reaction to ideas prominent in the early 20th century, Marxism and Freudian psychoanalysis. Both had sizable followings of devotees, both claimed to be scientific, and both were finding evidence everywhere to confirm their theories. Popper found Freudian theory either untestable or unfalsifiable, ie. Freud could explain psychological problems people had because they were either hugged too much or too little. In Popper's view, Marxism had begun as scientific, but devolved into self-affirming dogma. Do you hate your job? Yes? This proves Marx was right. Do you like your job? Yes? This also proves Marx was right, the bourgeois brainwashed you![6][7] While this doesn't mean that Freud and Marx have nothing to offer us intellectually, it does suggest that people should not uncritically accept any idea that sounds too good to be true. According to Popper, while it is possible that Marx was so right that you literally can't disprove him, it's very unlikely.

Politically, Popper was a firm believer in the virtues of liberal democracy and the open society on which he felt it depended. In his book The Open Society and Its Enemies, he criticized Plato, Aristotle, Hegel, and Marx as having been forerunners of totalitarianism, largely through a shared historicist approach to human events. He believed that historicism, a set of theories claiming to have uncovered laws of historical development, were unscientific and were especially harmful because they substituted alleged historical prophecy for rational decision-making and conscious political value judgments. He argued that the reason why scholars in his time were so reluctant to criticize Plato in particular was due to his status in the canon of the great philosophers of ancient Greece.

Popper was of the founders along with Friedrich Hayek, Ludwig von Mises and Milton Friedman of the Mont Pelérin Society

and remained a key member of the organization for the years to come[8], also stating that, without Hayek's interest and support, The Open Society and Its Enemies would not have been published.[9] He claimed to be a socialist for "several years" after abandoning Marxism, but ended up abandoning it because it was, according to him, incompatible with individual liberty.[10]

Despite seeing the utopian efforts to create true social and economic equality as dangerous and doomed to fail anyway, Popper still supported efforts by the state to reduce and even eliminate what he saw as the worst effects of capitalism, such as the lack of social mobility.[11] Just like he conceded a bit to social democracy, Popper also became more conservative over the years, recognizing that social reform was harder work than it had seemed in the aftermath of World War Two, and that the modest egalitarianism of the European welfare state was perhaps as much as could reasonably be hoped for.[12][11]

On the topic of Christians who feel they are somehow superior to those with different beliefs:

On how science createdevelops theories:

On "socialism" and "egalitarianism":