Guy Fawkes, also known as Guido Fawkes, (13 April 1570–31 January 1606) was an English Roman Catholic terrorist/"freedom fighter", depending on your sympathies. He is (erroneously) regarded as the instigator of the Gunpowder Plot, a plot to blow up the Houses of Parliament and kill King James VI and I

in 1605. In fact, he was just really the group's explosives expert.

Involvement in the plot[edit] 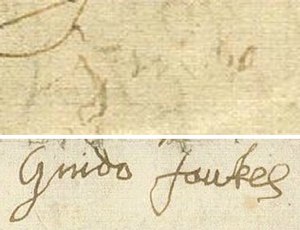 Although a prominent historical figure and possibly the only member of the plot that is widely remembered, the conspiracy was masterminded by a small group of Roman Catholics led by one Robert Catesby.

Catesby had been (peripherally) involved in the 1601 rebellion led by Robert Devereux, 2nd Earl of Essex, which sought to replace Elizabeth I, then Queen of England, with James of Scotland; it failed and its leaders were executed. Elizabeth died in 1603, and James became king but didn't prove any more sympathetic to Catesby or other Catholics. For a while Catesby hoped for Spanish support to set up a Catholic monarchy, but when this failed he turned to other tactics.[2]

Catesby recruited Fawkes, a former soldier and zealous convert to Catholicism, because his experience as a soldier made him a suitable candidate for the high-risk work of setting up the explosives. On 4 November 1605, Fawkes was found in the cellar of the Houses of Parliament with thirty-six barrels of gunpowder. He was arrested and subjected to torture, including on the rack, for two days. He eventually confessed everything and gave the names of some of his co-conspirators.

Fawkes' execution, by hanging, drawing and quartering, took place on 31 January 1606. Fortunately for Fawkes, he was able to break his own neck while he was being hanged and was already dead when his intestines were taken out and burned. The four parts of his body were sent to four different regions of England and publicly displayed as a warning to others.[3]

Guy Fawkes Night on November 5 is a festival that was intended to commemorate the foiling of the Gunpowder Plot and the saving of King James' life. It is still enthusiastically celebrated across the UK each year with fireworks and bonfires on which effigies of Guy Fawkes are burned. Effigies of unpopular people and politicians are burned too, notably in the town of Lewes.[4] The evening is still celebrated in similar ways in a few other countries that used to be part of the British Empire too.[5] Guy Fawkes Night is not widely celebrated in the USA nowadays. It was, however, a holiday in colonial America and continued to be celebrated in some parts of the present-day United States into the 19th century.[6] 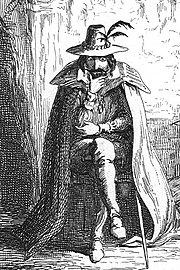 He's not the messiah. He's a very naughty boy.

Despite being a convicted terrorist, and one of the most famous ones to boot (Osama bin Laden has nothing on Fawkes in the Who's Who of Terrorism even if bin Laden, unlike Fawkes, actually managed to land a blow), Fawkes often appears in pop culture as some sort of anarchist folk hero.

originally published between 1982 and 1989, and its 2005 movie adaptation. In V for Vendetta, a man in a Guy Fawkes mask sees himself as a spiritual successor to Fawkes as he attempts to blow up Parliament in order to fight against a repressive fascist regime,[note 1] putting the whole "terrorist or freedom fighter" thing into far more uncomfortable territory.

Guy Fawkes masks, as seen in V for Vendetta have become symbols of the Anonymous movement, as worn within the Occupy movement[7] and when protesting against Scientology.[8]

The truth is that Guy Fawkes was only fighting to overthrow a Protestant theocratic dictatorship in order to replace it with a Catholic theocratic dictatorship. Ideologically, Fawkes would have had much more in common with a modern Christian fundamentalist than with any member of Anonymous or Occupy or any people who don't wish to force their beliefs on others. It appears that the people that admire Fawkes the most are the ones who know the least about him.

Guido Fawkes is also the name of a website published by right-wing Irish/British journalist Paul Staines.[9] Staines has campaigned for Boris Johnson, and Guido Fawkes's former deputy editor Hugh Bennett now works for Jacob Rees-Mogg.[10][11] So he's probably not going to blow up Parliament just yet.