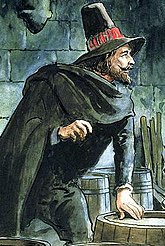 The Gunpowder Plot of 1605, was a failed assassination/revolution attempt by a group of provincial English Roman Catholics against King James I of England and VI of Scotland.

The plot intended to kill the king, his family, and most of the Protestant aristocracy in a single attack by blowing up the Houses of Parliament during the State Opening on 5 November. The conspirators had also planned to incite a popular revolt in the Midlands. However, a Member of Parliament whom the conspirators believed might be sympathetic to their cause tipped off the King. The conspirators were arrested and the attempted uprising was a failure.

Guy, or Guido, Fawkes is the most famous conspirator, since he was the man arrested in possession of the gunpowder, which was positioned in cellars under the Palace of Westminster. This has led to the myth that he was leader of the plot, although it was masterminded by Robert Catesby and Fawkes was a latecomer. Father Henry Garnet, head of the Jesuit Order within England, was also aware of the conspiracy (at least according to his trial) and was hanged for this. The conspirators, including Fawkes, were executed by hanging, drawing and quartering, a series of tortures and mutilations which was reserved for those convicted of high treason.[1]

The evening of the anniversary of the discovery and foiling of the plot, the 5th of November, is known as Guy Fawkes Night. It is traditional in the UK (especially in England) to burn effigies of Guy Fawkes on bonfires with accompanying firework displays. Prior to the burning of the effigy it used to be paraded with the plea "Penny for the Guy", to raise money for the fireworks but this does not happen so much today.

Until the twentieth century, this occasion was explicitly patriotic and anti-Catholic, a celebration of the Protestant monarchy's triumph over papist treachery.[2] Fortunately, as with Christmas, Easter and Mother's Day, it has become secularised, and is now regarded as an excuse for bonfires, fireworks and some quaint traditions.[3] Also as with many traditions associated with Christmas and Easter, the bonfire tradition derives from pagan times, when it was part of Samhain, the beginning-of-winter commemoration which is also the ancestor of Hallowe'en.[4]

A connected tradition is for the Yeoman of the Guard[note 1] to search the cellars of the Palace of Westminster before the State Opening of Parliament, just in case some wag has sneaked a few barrels of gunpowder in as a jape.[5]