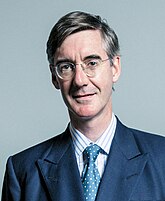 Jacob William Rees-Mogg (born 24 May 1969) is a Charles Dickens character made real the Member of Parliament (MP) for North East Somerset in the United Kingdom and a member of the Conservative Party, serving as Leader of the House of Commons and Lord President of the Council from July 2019. Rees-Mogg is ideologically one of the party's fiercer traditionalists; this has earned him the nickname "Honourable Member for the Eighteenth Century", among others.[1]

Before entering Parliament Rees-Mogg worked as a fund manager, but the Financial Times found that "his returns were less than stellar", and since he left Somerset Capital Management it has "blossomed".[2] He was first elected to the House of Commons in the 2010 United Kingdom general election as MP for the newly drawn constituency of North East Somerset, after unsuccessful bids in Central Fife in 1997 and The Wrekin in 2001. He served on several select committees but held no ministerial posts or other roles[3] until fellow "out-of-touch" posh boy Boris Johnson appointed him Leader of the House of Commons when he became Prime Minister.

Rees-Mogg's politics are a strange mix of religion-driven early-20th-century authoritarian conservatism and liberal populism. Good examples of this admixture can be seen in his opposition to abortion, even in matters of rape,[4] and same-sex marriage,[5] both of which he has gone on record with being totally against on religious principles (he is Roman Catholic) but is otherwise opposed to the Conservative Party changing its policies for the country.

Even outside of social matters, Rees-Mogg maintains a populist way of debating, though is more blatantly exposed to corporate influences. One clear example is tobacco. For instance, the government is in favour of monochromatic cigarette packs to reduce appeal to children, which Rees-Mogg claims "[takes] freedom from the British people". Similarly, he is opposed to taxes on cigarette packs, which he says is an attack on poor people. Certainly this opposition to harsher measures has nothing to do with a £23 million stake he has in the tobacco industry.[6]

He does have two strong virtues going for him: his opposition to capital punishment and support for legal due process for Brits even accused of jihad.[7]

With the Conservative Party one bad winter away from losing its voter base, who average at 71 years old, Rees-Mogg became one of several competing faces of the future Conservative Party alongside Boris Johnson, as party activists began calls for a revolution within the party catering towards a more personable Conservative leadership which could gain the attention of young people.[8] Rees-Mogg's faux-populist style earned himself a personality cult nicknamed "Moggmentum", in reference to the more successful Momentum advocacy group, which began in support of Labour MP Jeremy Corbyn's 2015 leadership bid.[8]

In May 2013 he delivered a speech to the Traditional Britain Group. This organisation, as well as opposing immigration and membership of the European Union, has also called for black British people to be "requested to return to their natural homelands", and he attracted considerable criticism for associating himself with them. Rees-Mogg later expressed himself "shocked" by the group's views.[9] Rees-Mogg claimed to be unaware of the organisation's nature, but its vice-chair was Gregory Lauder-Frost who has decades of experience in far-right fringe Tory groups like the Western Goals Institute and Conservative Monday Club as well as a fondness for pre-war Germany (calling for Germany to be restored to its 1938 boundaries) and a conviction and two-year prison sentence for theft.[10]

In November 2017 he held a meeting in London with Steve Bannon, former aide of Donald Trump and also formerly boss of right-wing propaganda site Breitbart.[11]

Rees-Mogg described the use of concentration camps during the Boer War as 'appropriate' during a 2019 episode of Question Time, despite them being responsible for the deaths of 26,000 civilian women and children.[12]

Rees-Mogg's fan club celebrate him for his "honesty" and "frankness", that even though he holds extreme views he is a man of principle.[13][14] However he has been criticised for failing to declare financial interests when speaking in parliament.[6] He has also been accused of "lying" about Jeremy Corbyn's record, falsely claiming Corbyn had voted against the Good Friday peace agreement in Northern Ireland when Corbyn actually voted in favour.[15]

In May 2018 it was revealed that despite calling for tougher sanctions on Russia, his firm Somerset held an investment in Russian bank Sberbank; this bank was already subject to sanctions although Somerset Capital Management's shareholding did not violate them.[16] He has also been criticised over Somerset's holdings in an Indonesian firm whose drugs are often used as an abortifacient, despite being marketed for stomach ulcers: this would seem hypocritical in view of his opposition to abortion.[16] Rees-Mogg is not directly involved in the management of SCM although he continues to profit from his part-ownership of the firm[17] and could sell his share if he objected to the company's ethics.

Rees-Mogg has duplicitously simultaneously advocated for a hard Brexit as MP while advising investors at Somerset Capital where he also works to take their capital out of the country due to Brexit uncertainty.[18]

Whereas Boris Johnson has perfected a public persona of a brash but lovable buffoon, Rees-Mogg has settled on an almost cartoonish version of a Downton Abbey-esque toff

. However, he isn't quite as posh as he appears. His father, William, was from minor Somerset gentry, attending Charterhouse and Oxford—but Rees-Mogg senior's lordship wasn't a hereditary title and he was made a life peer for being a Tory newspaper hack.[19] Just like Boris uses his persona as a shield and as packaging for some seriously nefarious shit (a.k.a. standard Tory policy these days), Rees-Mogg’s absurd aristocratic attitude tend to disguise or soften his downright regressive views in a haze of “olde worlde” eccentricity.