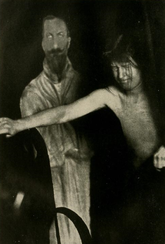 Eva Carriere with cardboard cut out figure King Ferdinand of Bulgaria which Inglis claimed was a real spirit.

Inglis had interests in the paranormal, and alternative medicine. He was also interested in Lamarckian evolution. In his book The Hidden Power (1986), he invoked a conspiracy theory that the scientific community are suppressing evidence for mediumship and psi.[1] His books had a tendency to reject naturalistic explanations for any alleged paranormal phenomena.

Inglis was one of the very few parapsychologists to take ectoplasm seriously, as he denied it was the product of fraud. His books contain countless errors on the subject of mediumship. In his book The Paranormal: An Encyclopedia of Psychic Phenomena (1986) he claimed that the ectoplasm of Eva Carriere was genuine as it was too big to have been swallowed and regurgitated like the skeptics had alleged. However this was a straw man argument as no skeptic had ever claimed such a thing. Skeptics had pointed out the ectoplasm was made from cardboard and magazine cut-outs (which were found) and were easily hidden in the room by her accomplice Juliette Bisson. Inglis avoided mentioning this, and ignored any evidence of fraud.

The magician Bob Couttie wrote in his book The Hidden Power that Inglis had deliberately filtered out evidence of fraud against mediums and ignored their confessions. Couttie wrote that Inglis had not familiarized himself with conjurer and magician techniques and was credulous when it came to the subject of mediumship.[2]

It's unclear if Inglis was a creationist, but he did give an anti-evolution book by the old earth creationist Michael Pitman a positive review.[3] He also supported Rupert Sheldrake's ideas and defended non-Darwinian evolutionary mechanisms such as Lamarckian inheritance.[4]

Inglis was a close friend to Arthur Koestler and they established the KIB Society (with Tony Bloomfield) to sponsor paranormal research (which was later renamed The Koestler Parapsychology Unit).

Some of his books have been republished by White Crow Books a spiritualist publishing company co-owned by Michael E. Tymn.