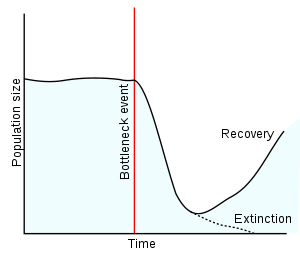 The founder effect is a special case of a bottleneck, where a small subset of a population founds a new population, having migrated to a new area, e.g. an island on the coast. The key features of this particular variety of bottleneck are the new location and that the original population survives.

One famous example of the founder effect in humans is in the Amish people of the United States. A small population of Amish left Europe in the early 18th century CE for Pennsylvania. The Amish are not inclined to breed outside their own church, creating a closed population. This has led to the preservation of a number of genetic disorders in the Amish community.[1][2]

Other human groups with high propensity to genetic diseases owing to a founder effect include French Canadians[3] and Ashkenazi Jews.[4]

More often, however, what is referred to as a bottleneck is when the majority of a population dies off, leaving only a small number of survivors to go on.

It is theorised, based on genetic evidence, that, a few tens of thousands of years ago, the population of Homo sapiens was reduced for a period to a few thousand or tens of thousands of people.[5] Such a bottleneck would explain the extremely low level of genetic diversity found within our species, when contrasted with others, such as chimps.[note 1]

A more contemporary, smaller-scale example occurred on the island of Pingelap, Micronesia. The island is noted for its unusually high incidence of achromatopsia, a type of total color-blindness, among its native population (i.e. ~5% incidence among adults, vs. 0.003% among American adults). This can be traced back to a tropical storm in 1775, in which all but 20 Pingelapese natives were killed, and the surviving ruler, Mwanenised, was suggested to be a carrier.[6]

Various other animals exhibit signs of having been through a bottleneck at some time, or are going through one at this point. These include:

When a new population is formed it is highly unlikely to have the same level of genetic diversity as the parent population. Especially in non-founder effect situations, i.e. when the parent population is killed off, this loss of diversity is permanent. What this means is that if a species comes extremely close to extinction but rebounds, it is not necessarily out of the woods yet. Additionally, an extended bottleneck can lead to inbreeding, causing further problems.

The founder effect can be important in speciation, as the separation of the new population causes it to evolve separately from the parent, and the loss of diversity may paradoxically give the new species a head start in this.