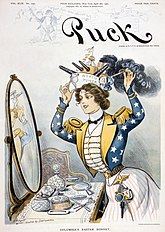 American exceptionalism is a belief that the United States is unique or exceptional when compared with the historical development of lesser other countries. It would be easy to pigeonhole as extreme nationalism, but it is more expansive and more concentrated than that. It is a popular ideal held by many hillbillies American conservatives,[2] though the temptation is not entirely limited to the right. Several accidental comedians liberal historians and politicians have embraced certain aspects of American exceptionalism, in particular in the "vital center" and "end of ideology" views popular among American liberals in the mid-20th century. American exceptionalism is also a core belief within neoconservatism, because if there's one thing neocons are good at, it's not learning a lesson from history.

American exceptionalism may view the United States through the lens of a special historical determinism for the United States, separate from broad historical trends in the rest of the world. It may, for a variety of reasons, view the U.S. as a nation that is immune (or should be immune) from things like terrorism and dictatorship — "It can't happen here."[note 1] The U.S. in turn is supposed to assume an activist role around the world in promoting "freedom" or being a "shining example" to the world, a sort of "City on a Hill". This sort of presumptive moral superiority is not always welcomed, especially by countries that have "different views" on human rights, or who have had democratically elected presidents replaced with brutal dictators by or with assistance from the US, among other issues. Of course, one could also argue that the U.S. should not entangle itself in the affairs of other countries, as advised by George Washington.

The belief by Americans in their own exceptionalism is one of the reasons for resentment or dislike of the USA, even though, ironically, it is just the American version that is the most visible today, since the U.S. is the greatest of the Great Powers at present. You will find exceptionalist sentiments in other countries, too.[citation needed] The U.S. is actually rather average in this regard; Americans are merely humans, just like everyone else.

From colonial days, the English-speaking, European-descended residents of what would become the United States viewed their own colonial societies and (more-or-less) shared culture as unique or at least virtuous. Calvinist preachers in New England developed a theme of American uniqueness which worked itself into the foreign policy of the newly independent republic. Rather than entering military alliances with the European powers as part of Europe's balance-of-power diplomacy, political elites in the new United States sought to trade with Europe and to establish regional hegemony over its own sphere of influence (Latin America).[3] The focus was not on the entangling alliances with which Europeans tormented themselves,[4] but on ensuring Europeans did not interfere with what was perceived as an American sphere of influence. This had dual effects, such as (occasionally) protecting Latin America (including California) from undue European interference, but also insured that America kept itself out of the struggles to assert a "balance of power" in Europe (except in 1917 and 1941, for example). It is often said (by persons undefined) that the US was sympathetic to Britain diplomatically, but played little part in the great game[5] of European diplomacy.

Another way in which the United States saw itself as fundamentally different from the European powers was in its eschewing (like Luxemburg) imperial ambitions, though the U.S. did acquire an empire of its own, after armed conflicts, including the splendid Spanish-American War of 1898. The U.S. exercised sovereignty over a number of overseas territories, including Puerto Rico, Hawaii, Guam, the Philippines, Alaska, Samoa and Cuba. Paradoxically, Americans' belief in their exceptional nature helped to inform the acquisition of such colonies, as Americans believed they were uniquely suited to ruling foreign peoples benignly.[note 2] Today, Puerto Rico and Guam operate as unincorporated U.S. territories. Hawaii was admitted as a state in 1959. Cuba and the Philippines are sovereign nations, with the latter acting as a staunch American ally in the Pacific.

American exceptionalism also led the US to employ idealistic and democratic rhetoric, even when getting involved in brazen "sphere-of-interest" or geopolitical engagements, such as the invasion of Grenada

in 1983, which was intended to fuck over the Soviets and Cubans.

Today, elements of exceptionalism can be found in the US's justifications for interventions. In the 1990s in particular, there were many interventions that didn't have much basis in national interest (including Somalia and Yugoslavia). The ethnic Albanians living in Yugoslavia no doubt welcomed American assistance to end Milošević's genocide attempt, especially as the rest of Europe put on blinders and refused to act, providing an example of American benevolence, though based on a seemingly arrogant premise.

It remains to be seen whether Pyongyang-style isolationism or Swiss-style non-interventionism will prevail over Washington's desire to play an active role in global affairs in the short-, medium- and long-term.

American exceptionalism is a two way street. While some Americans really, and mistakenly, believe in the overemphasized and exaggerated uniqueness of their country, some non-Americans do too, though in a different way. Like all other countries, the U.S. is imperfect and not beyond criticism. Despite this, there seems to be an obsession these days (by Americans and non-Americans alike) with every single thing that happens in the "greatest country on Earth." If there is a country one almost always hears about when reading or watching the world news, it is the U.S. They are often held to absurdly high standards compared to everybody else. If an authoritarian regime massacres its own people, no one bats an eye. But if the U.S. military accidentally hit a civilian target, which it normally avoids, everybody loses their collective minds. By doing so, they have affirmed American "moral superiority," whether they acknowledge it or not. The irony of being U.S.-centric may be lost on many anti-American propagandists and critics.

The moral of the story is to take an informed and moderate view of things and know that issues outside of the U.S. matter too.