Blood type is a scheme that separates people into phenotypic groups based on characteristics of their blood. Despite most attention placed on two type systems (ABO and Rh), there are currently 35 systems recognized by the International Society of Blood Transfusion.[1] Still, most people's blood type is described as the combination of ABO and Rh classification.

In the ABO system, the most common types are differentiated by the presence of antigens on the surface of the red blood cells. The relevant antigens can be Type A, Type B, both, or neither corresponding to blood types A, B, AB, and O, respectively. In general, these antigens signal which type of blood the immune system will not respond to. Thus, people with Type AB blood will respond immunologically to no blood types and can generally receive donations of all types of blood. On the other hand type O blood has no such antigens, doesn't generate an immune response from anyone, and can often be donated to any recipient.[2] (Compare this with your average Hollywood movie blood transfusion, in which a recipient with type AB blood has to receive type AB blood.)

The commonly known part of the Rh system is slightly simpler in that people are classified based on the presence or absence of Rh factor on their red blood cell surfaces. It is this presence/absence that forms the "positive"/"negative" words added on the people's ABO classification. In actuality, the Rh system further classifies people based on five different antigens resulting in 50 possible Rh-type blood groups. Rh factor refers to only one of those antigens.

Blood types are known to affect people's risk of being affected by many different diseases.[3] The reason for these disease risk associations is not always well understood and is complicated by both blood group subtypes and differences between phenotype and genotype.[3] A summary of increased disease risk from blood types and specific blood antigens was reported by D. Rose Ewald & Susan C. J. Sumner:[3] 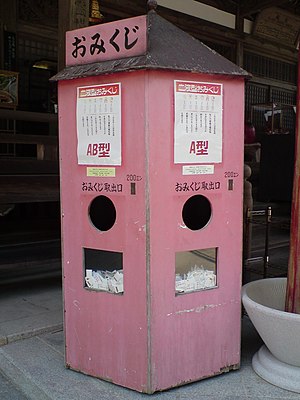 Blood type and personality in Japan[edit]

A belief that blood types influenced personality in Japan arose in the early 20th century, partially as a response to European style "scientific racism". In Japan, the several blood types are distributed more evenly than they are among Europeans; ascribing personality types to blood types indicated a more adaptable mix of traits in the Japanese race. In the 1930s, the hypothesis was investigated for military use in breeding better soldiers.[8] The blood type beliefs were revived in the 1970s as a form of personality test similar to astrology, by Masahiko Nomi, as a sort of pop psychology. According to Nomi,

The personalities ascribed to the several blood types carry forth stereotypes that ultimately backdate themselves to the abiding influence of Japanese feudalism. Japan saw itself as a society of samurai (type O) and peasants (type A), the most frequent blood types in Japan; with a smaller number of merchants and artisans (type B) and intellectuals (type AB).[10]

Books promoting these beliefs about blood type sell well in Japan. On the Japanese language Wikipedia, most articles about celebrities contain information about their blood types. Dating websites and social networks in East Asia often include the opportunity to share the user's blood type. Anime and manga often describe characters by blood type. Employment applications may call on the applicants to indicate their blood type. The belief has spread to neighboring areas including Korea and Taiwan.[11][10]