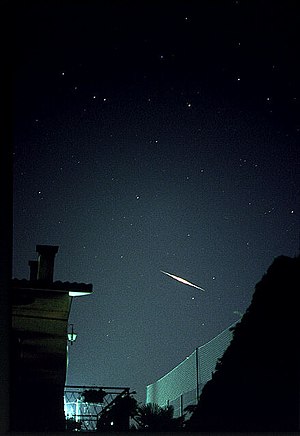 An Iridium flare or satellite flare is a flash of light in the sky caused by sunlight reflected off an artificial satellite. More precisely, the term "Iridium flare" refers specifically to a flare produced by the Iridium series of communication satellites, whose large, reflective, panel-like antennae cause these very bright, predictable flares.

When they occur, they can be the brightest things in the night sky and, because of the speed at which satellites orbit, can appear to move very quickly. The flares are short-lived, as the satellite's solar orientation and the observers on the ground change fast with the rotation of the Earth. As a result of their unique appearance and general ignorance about Iridium flares, Iridium flares are one of the phenomena most commonly mistaken for UFOs and little green men, second only to light pillars

and refracted light from celestial bodies.

This astronomy-related article is a stub.
You can help RationalWiki by expanding it.
Retrieved from "https://rationalwiki.org/w/index.php?title=Iridium_flare&oldid=2423847"
Categories:
Hidden category: