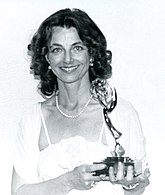 Linda Moulton Howe posing with her 1981 Scottsdale, AZ Regional Emmy Award (not a national Emmy as she sometimes neglects to mention) for A Strange Harvest

Linda Moulton Howe (1942–) is a ufologist and "investigative journalist". Among other things, she claims that in 1983 she was shown a secret presidential briefing paper that revealed how "extraterrestrials created Jesus" and placed him on earth "to teach mankind about love and non-violence."[1]

Initially focusing on an environmentalist message, she quickly turned to UFOs and associated phenomena, leading to what is probably her best known work, the 1980 documentary A Strange Harvest, about cattle mutilations that she concludes are unusual animal deaths caused by "non-human intelligence and technology".[2] She claims to have seen secret government documents that prove aliens are annoying the human race by mutilating cattle, abducting people, and zooming around military bases in flying saucers.[3] Howe (in collusion with radio host Art Bell) once vigorously promoted an ordinary hunk of metal as "debris from the Roswell crash", claiming it was a "mystery metal" unlike any seen on earth.[4]

She runs her own website called "EarthFiles.com" where, for a measly $45 a year, you can access her body of work. Howe follows most leads or phone calls if it involves UFOs, ancient aliens, crop circles and environmentalist conspiracies (eg. colony collapse disorder and Monsanto). She occasionally asks real scientists for opinions on these matters, but then promptly dismisses or rationalises them away. She regularly appears on the Ancient Aliens TV series.

She coined the catch phrase "high strangeness" to describe the focus of her Weekly World News-ish style of journalism.

Howe's gullibility and deceptive "reports" have caused even staunch Ufologists to give her extremely low marks for credibility.[5]

Over the years, Howe's "reports" for radio program hosts such as Art Bell, George Noory and Whitley Streiber covered an astonishing range of woo subjects that appeal to UFO enthusiasts, conspiracy theorists, and the Second Coming crowd.[7] Examples: