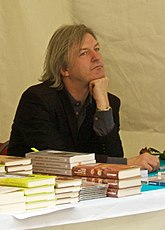 the man back in 2008, when some people still mistook him for a leftist (this photo was taken at an event of Neues Deutschland

who did not agree with the stance of konkret editor-in-chief Hermann L. Gremliza regarding the 2003 Iraq War, and the NATO intervention in Serbia 1999 and subsequently went off the deep end, becoming a conspiracy theorist,[1] an alleged antisemite[2][3][4] and the leader of his own crank-monthly COMPACT

as well as a (largely stillborn) movement "against the financial capital" that he claims is "open to both right wing and left wing people". He has given numerous interviews to fellow crank, antisemite, and conspiracy peddler Ken Jebsen

and has expressed sympathy for PEGIDA,[5] the Alternative für Deutschland and Vladimir Putin. He is regarded as one of the leading figures of the German "new right". His approach has often been described as that of a "Querfront" a supposed alliance of left- and right-wing extremists, that is often translated as third positionism in English, but would literally mean something like "front at a right angle to the normal direction", i.e. a "front" that — opposed to a traditional popular front of the left does not include only parties "adjacent" to each other on the political spectrum, but left- and right-extremists with the exclusion of the center of the spectrum. Elsässer is also a promoter of Federal Reserve conspiracy theories.[6] He furthermore tried to play down the massacre of Srebrenica by denying the official number of victims, shifting the blame and second-guessing the term "genocide" as early as 2003.[7] He was also a major apologist of the Dinner Jacket, notably defending the crackdown after the laughably faked 2009 election.[8] Despite supposedly being against big capital, he's also into Global warming denial and attacked Greta Thunberg.

So what's he up to lately?[edit]

Well, besides speaking at Pegida rallies and writing blog posts for his crank daily monthly magazine, he is still trying to promote his "movement" against "financial capitalism" by trying to appeal to people in the Alternative für Deutschland and those to the right of it. After having won the first round of a libel process (German libel law, while not as strict as that in Britain, allows a lot more suing for the alleged victim than the law in the US) he went as far as posting "Court decides: Elsässer not an antisemite" on his blog. However, his opponent has announced to go in the second round.

This conspiracy theories-related article is a stub.
You can help RationalWiki by expanding it.
Retrieved from "https://rationalwiki.org/w/index.php?title=Jürgen_Elsässer&oldid=2493280"
Categories:
Hidden categories: