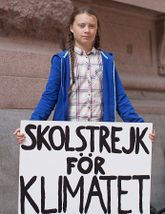 Greta Thunberg (2003–) is a Swedish teenage advocate for the radical change necessary to avoid climate change catastrophe. She has presented her message in many important forums including the United Nations, where she has made a significant impact on the global narrative of climate change. Her emotional pleas for change and her anger directed at those who have "ruined the Earth for the next generation" have found positive reception. Thunberg has received numerous awards, media coverage, and messages of admiration from world leaders. While for the most part she is accepted as brave and intelligent with a promising future, representative of her generation, she was also met by vicious resistance from right-wing climate change deniers who have politicized and depicted her as a vile dangerous demon attempting to hoax the world into economic decline.[1]

Thunberg started off by taking Fridays off school and protesting in front of the Swedish Parliament, Riksdagen, with her trademark sign "Skolstrejk för klimatet" ("School strike for the climate"). Her supportive family and some of her schoolmates joined her, and those of other schools, and thanks to social media combined with news coverage, the trend quickly spread across Sweden and around the world. She is a supporter of Extinction Rebellion

and donated the proceeds from a multimedia project. Thunberg has taken full advantage of social media and her ability to advocate to the younger generation. She encouraged students to strike all over the world which resulted in a mass global strike in many countries.

Thunberg has inspired a number of other activists of her own generation, many of them young women who are now prominent in their own right, such as Germany's Luisa Neubauer

and the US activist Alexandria Villaseñor

She maintains that politicians and other decision makers should look at what science says about the global climate crisis and act accordingly.

The idea that a teenage girl advocating for a better future could be a demonic threat to the very heart of society is not new. Of course, the reaction to Thunberg from the climate change denialists is also what you expect, containing the atypical blend of conspiracy theories and doctored memes,[2] personal attacks,[3] "jokes" about her being in a "freak yachting accident",[4] and a particularly stupid pundit invoking Godwin's Law... because she wears braids.[5]

The viciousness of personal attacks quickly reached batshit-insane levels in October 2019 when an effigy of Thunberg was hung on a bridge in Rome.[6] Hanging by the neck was a sign, written in English saying "Greta is your God". While not only bizarre and confusing, it is a threatening response to Thunberg's advocacy and a sign of how afraid people are of the personal cost required to change our policies. Resistance to Thunberg coincides with countries and regions that have high rates of denialism, and also coincides with oil-producing countries such as the United States, the province of Alberta in Canada, Russia and the Gulf countries (such as the United Arab Emirates and Qatar). There is also a less extreme but still ridiculous and dangerously politicized climate change denial in Hungary, Italy, Australia, and Brazil where Thunberg has been maligned by the media or far-right populist politicians.

Michael Knowles, of The Daily Wire, went too far, even for Fox News (kind of), calling Thunberg "a mentally ill Swedish child" and accusing the "international left" and her parents of "exploiting a girl with many mental illnesses…"[7] Laura Ingraham couldn't be left out of the being a horrible person competition, a few hours after Knowles' remarks, comparing footage of Thunberg's address to the UN, to a clip of Isaac Chroner, the child cult leader from the 1984 horror film Children of the Corn, who murder all the adults in their town.[8]

Our favorite classical liberal "skeptic" Sargon of Akkad had some opinions in a video, You Have Nothing to Fear from the Cult of Greta Thunberg summed up as, "She doesn't know what she's talking about" and "cult like deification of Greta, is getting real creepy" and that she should be ignored (just like he ignored Anita Sarkeesian, right?). Other choice quotes include, "Well everyone's pro-science. Science is how we work out what's true about the world … No one is opposing this [climate science], what they are opposing is the framing of what's happening." and "Obviously she's a puppet, obviously she's a puppet of her parent, she's 16; she can't not be". He also thinks Trump handled it the right way: "just ignore the child". Shocker, he brings up socialism, communism and the freaking Soviet Union.[9]

One of the most illogical statements came from Pastor Robert Jeffress, "Somebody needs to read poor Greta Genesis, Chapter 9, and tell her the next time she worries about global warming, just look at a rainbow. That's God's promise that the polar ice caps aren't going to melt and flood the world again."[10] 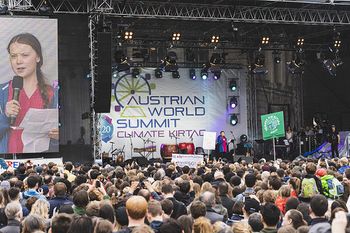 Greta has revealed that she has Asperger syndrome, a nebulously-defined subtype of autism. Autism is a developmental disability that involves strengths and challenges.

While one might focus on Thunberg's arguments and the amazing feat of garnering the world's attention at such a young age, others seem obsessed with her autism in an attempt to blame her entire "irrational message" on a disability.[12] Thunberg doesn't view her condition as a major hindrance to her life. While admitting that she has struggled in the past, she now considers her Asperger syndrome as a superpower.[13]

Greta's autistic traits have impacted the clarity and strength of her message. She's known for her simple blunt honesty, and she cannot abide hypocrisy, two autistic traits that help her fight against anti-science politics.[14] Autistic people tend to have unusually intense passions that allow them to harness powerful focus.[15][16] Greta credits her autism for her clarity of mind and determination in pursuit of change.[17][18]

Autistic people have rallied around her, starting the hashtag #AutisticsForGreta to show support. Some consider her a role model.[19][20]

In 2018 she wrote: "I have Aspergers syndrome so, for me, most things are black or white. I look at the people in power and wonder how they have made things so complicated. I hear people saying that climate change is an existential threat, yet I watch as people carry on like nothing is happening."[21]

While some people with the best of intentions have treated Greta like she is superhuman, autistic people (including the very remarkable ones) are still regular human beings and have daily struggles associated with the disability. Greta is still a teenager who experiences normal human things like emotions, struggles, and hard work. Pretending that she's some type of superior being doesn't make sense and has some unsavory implications such as downplaying her achievements, talent, and hard work.[22]

She has a relatively nuanced position on nuclear power, writing: "Personally I am against nuclear power, but according to the IPCC [the United Nations Inter-governmental Panel on Climate Change], it can be a small part of a very big new carbon free energy solution, especially in countries and areas that lack the possibility of a full scale renewable energy supply - even though it's extremely dangerous, expensive and time consuming. But let’s leave that debate until we start looking at the full picture."[23] 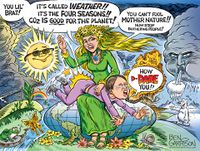 Thunberg, at least according to Ben Garrison.

Much of the critical responses to Thunberg's activism are straw men and personal attacks. Instead of engaging with what she says, her critics way too often focus on other issues such as her age and sex (eg, hysterics that she's a "little girl with mental problems")[24][25], her attitude[26], other baseless charges such as claims that she is being "manipulated"[27][28], and, when all else fails, typical wingnut boogeymen ("George Soros!" "Antifa!"). [29] Engaging with what she actually says seems very rare indeed. This is not a new phenomenon when it comes to environmental activists (an unfortunately "typical" debate strategy of climate change denialists is to "poison the well"), but Greta has handled the hysterics admirably, brushing the hysterics off with bemusement and keeping the focus on the consensus science.[30] Meanwhile, her ability to articulate and communicate the climate science, and getting people to listen, has earned widespread support from scientists and academics in the field.[31][32][33]

One less ad-hominem oriented criticism involving her tone is that it is heavily reliant on "weaponizing shame" [34]. While some would argue that the very inaction of governments (up to the point of flat out embracing climate denialism in some cases[35]) justifies this, some critics do find this approach too confrontational and divisive (though climate change politics has unfortunately *always* been nasty and divisive). [36]

Her UN speech on September 23, 2019, where she criticized leaders only able to talk about "money and fairy tales of eternal economic growth"[37] resulted in criticism from those who believe that, contrary to her opinion, it will actually be ingenuity and economic growth that will be the ultimate driving force for a solution to the climate change issue. [38] On the other hand, other commentators agree with Thunberg that the current capitalism paradigm needs adjustment in order to handle climate change, [39] and reforming capitalism to be more "stakeholder" oriented (which includes awareness of climate change) was a major topic of the 2020 World Economic Forum at Davos.

Another criticism is less on her and more on the media (and a criticism that Thunberg agrees with): the media tends to disproportionately focus on just her, which is detrimental not only the message, but also to activists in other countries (many of them from developing countries far more on the front line when it comes to climate change). In addition, similar to Al Gore, this over-focus has given climate denialists a convenient boogeyman to attack. [41][42] Another criticism is that occasionally the praise for Thunberg has devolved into "virtual canonisation" -- another criticism that Thunberg would agree with, as she wants the focus to be on climate change, not her. [43][44]

While many of her critics don't name autism specifically, their criticisms target autistic traits (or, colored from bias knowing Thunberg is autistic, exaggerate traits that may not even be present). Monotone or odd voice, muted or odd facial expressions, direct language, strong emotions, getting overwhelmed or distracted in busy environments, and other traits are all common in autistic people, though every person is different. Tragically, being attacked for autistic traits is a common thing that autistic people, especially outspoken autistic activists, have to endure.[45]

People, mostly the vile right-wing climate change denialists, have also claimed that Thunberg is mentally ill. This ignores that (1) autism is a developmental disability and not a mental illness, and (2) mentally ill people can still be right about things. She has been armchair diagnosed with illnesses ranging from depression to OCD by the leader of the far-right People's Party of Canada

.[46] After harsh backlash, however, he has later shrugged out a notpology while still maintaining his denialist stance and neglecting her achievements by accusing her to be a "'pawn' of the climate movement".

Fox News, in an uncharacteristic moment of decency, decided to stop booking Michael J. Knowles after he called Thunberg a "mentally ill Swedish child," among other things.[47] (You'd think that if a child were mentally ill, it would be a reason to be extra kind to them, not to bully them.)

"It's absolutely unconscionable to attack someone for their disability, especially when that person is a child," Bascom stated.[48]

Part of Thunberg's mass appeal is her ability to put forth points with eloquent simplicity (whether in Swedish or English). She cuts through the rhetoric of large and powerful but slow-to-move international organizations, states, and the like with direct statements, such as: