From RationalWiki
(Redirected from Jail)
Jump to navigation Jump to search 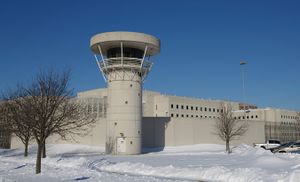 A prison is a government facility — in some cases, a privately owned facility that operates under contract with a government — intended to prevent criminal behavior by isolating convicted perpetrators from the general population. As seen in cases across the world, prisons generally do a poor job in preventing criminal behavior — and ironically, do a better job promoting it.

Although most people would prefer to never be forcibly held in a prison, it is currently the best choice when considering the alternatives:

When a government imprisons a person, no matter their crime, that government is then responsible for that person's life and well-being. This is because that person is no longer capable of providing for themselves, and a civilized nation should expect nothing less than perfect health care, opportunity for self-improvement and meaningful education for prisoners. Unfortunately, many prisons located in, or operated by, civilized nations are lacking in such expertise or provision.[citation needed]

Anecdotally, the careers of eminent jail-birds such as Mohandas Gandhi, Adolf Hitler or Nelson Mandela tend not to endorse the effectiveness of incarceration.

The United States holds the world record for imprisoning members of its population. The so-called War on Drugs and Three-Strikes-Laws along with the recent growth of the for-profit prison industry are important reasons for this state of affairs. One possible positive sign is that Republican Texas has seen rehab is more cost effective than prison. [1]

Despite being considered the land of the free, the American prison system has a fair share of human rights issues; women receive an insufficient supply of tampons and pads for example. The shortage of feminine products results in blood stained clothes and reusage of said products. The low product rations aren't actually due to low budget or a lack of awareness, it's a deliberate attempt to control and humiliate prisoners. Also, pads have a variety of other uses in prison therefore making it a valuable commodity .[2]

Humans (generally) are sexual creatures[3] and therefore must have a release in some way or another. While inmates having sex with each other and raping others is a widely known fact, guards having sex with inmates isn't. The paper Prison Culture In America explains not only do male guards have sex with female inmates, but female guards also have sex with male inmates as well. These sexual relationships contribute to the lack of trust inmates have towards prison staff.[4]

Transgender individuals are treated poorly in the prison environment. In one case, a Maryland prisoner named Sandy Brown was subjected to harassment. She was sent to Solitary Confinement by a guard, had one hour of recreational time during her 66 days of confinement, was watched by a guard while showering, and was provoked to commit suicide by a guard — all for the reason of being transgender. Fortunately, she won a court case due to the Prison Rape Elimination Act.[5][6] Unfortunately, her case is a microcosm of how LGBTQ individuals are treated in the American prison system 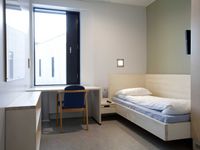 Yes, this is an actual "prison cell" in Norway — the idea being that the vast majority of prisoners will one day be let out, and thus, that it's probably for the better if the prisons don't function purely as traumatizing crime universities.[7]

Norwegian prisons even have recording studios for chrissakes.[7] The correlation to the rise of Norwegian black metal remains unproven.

Norway actually has a good prison system with fewer than 4,000 people behind bars, according to August 2014 data. This makes "75 per 100,000 people [in Norway], compared to 707 people for every 100,000 people in the US". Only 20% of Norway prisoners return to prison compared to the USA's 76.6% within five years. To top that off, Norway has a very low crime rate compared to the USA. Norway uses "restorative justice" on its inmates to repair criminals ... successfully.[7]

In closed prisons we keep them locked up for some years and then let them back out, not having had any real responsibility for working or cooking. In the law, being sent to prison is nothing to do with putting you in a terrible prison to make you suffer. The punishment is that you lose your freedom. If we treat people like animals when they are in prison they are likely to behave like animals. Here we pay attention to you as human beings.

As the paper Prison Culture In America has shown, American prisons have a culture of their own[4] like that of an animal's that is completely separate from normal, civilized society. With this in mind, it can be argued that individuals released from American prisons (and other country's unsuccessful prison systems for that matter) are re-admitted because they weren't given the proper environment and treatment to learn how to assimilate into normal society.

The rate of self-harm and assaults were the highest in the last decade for UK's prison system in 2014. According to Nick Hardwick, an ex-chief inspector, the decreasing prison security is to blame; since 2010, the prison staff was cut by 1/3 for example.[10]

In the year 2004, a Pakistani man, Yunus Rahmatullah

, was captured in Iraq by British forces and was held in an American prison in Afghanistan for at least seven years without a fair trial. For a decade, Rahmatullah was abused and tortured; however, US authorities eventually released him in May of 2014. In December 2014, Rahmatullah sued Britain’s Ministry of Defense and Foreign Office for the abuse.[11]

UK citizen, Ali Adorus was held in an Ethiopia prison (yes, we're aware this is not in the UK) for 18 months and was subjected to electric shocks and beatings. Through this case, we get an ironic quote from a member of the UK government:[12]

Sounds about right.[citation NOT needed]

As one might have guessed, prisons in developing countries are even worse. Even the most basic sanitation is difficult — for example, a shocking number of prisons in Nepal, India don't have access to clean drinking water. [13] The handbook Water, Sanitation, Hygiene and Habitat in Prisons by the International Committee of the Red Cross illustrates just how bad conditions can be in developing countries.[14] 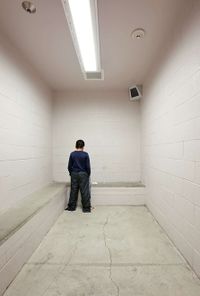 Solitary confinement — it's only boring until the hallucinations start.

Solitary confinement is the imprisonment of an individual while giving them no human contact — spare interactions with guards[16] that probably don't want to see you.[citation NOT needed] Individuals generally spend between 22 to 24 hours a day isolated in their cell.[16]

Solitary confinement has received a good amount of controversy even to the extent of New Yorker author Atul Gawande arguing that "long-term solitary confinement" to be literal torture.[17] Solitary confinement has shown evidence of mental deterioration and makes victims worse off than not having it. According to Dr. Terry Kupers, a psychiatrist with over 40 years of experience with prisoners in confinement, humans need "social interaction and meaningful activity" in order to stay healthy. Confinement provides none of these and with time, individuals' minds will slowly erode.[18]

Without meaningful stimulation, victims will eventually "move toward stupor and delirium

—and often people won’t recover from it". Once exposed to the outside world filled with stimulus, they are overwhelmed.[18] Said description draws parallels with the effects of sensory deprivation

, a much more extreme example of human isolation.

For the quote above, replace the word "nurses" with "guards" and you have a description for a prison. Nicholas Kristof writer criticizes psychiatric hospitals claiming the institutions to be literal jails with a hospital name.[20] Patients can be subjected to very harsh abuse; in one case, a man was allegedly shackled to bed and isolated for 6,300 hours.[21] That'll help his mental condition![citation NOT needed]