Arbitrary detentions consist of the arrest and detainment of persons without judicial recourse. Political opponents are frequently the targets of these extralegal processes in authoritarian states, although "democratic" Western states are increasingly willing and able to detain alleged terrorists without charges. Arbitrary detentions are in violation of Articles 1, 3, 7, 9, 10, and 11 of the Universal Declaration of Human Rights,[1] and also frequently ignore the assumed right of habeus corpus.

Extraordinary rendition is usually used to describe the secret and illegal movement of terrorism suspects for "enhanced interrogation" (sadly, a euphemism for torture) from the United States (where we pretend to have things called civil rights) to countries where such practices are legal. Although the actual rendition was mostly carried out by the CIA, it depended on the cooperation, and silence, of several other countries.[7] It was "abolished" by Barack Obama. Extraordinary rendition is distinguished from ordinary rendition plain old "rendition" in that the latter is a formal legal process in which a suspect or convicted person is handed over from one jurisdiction to another, subject to certain guarantees (e.g. that a suspect will get a fair trial, not subjected to torture and/or capital punishment[note 1]). Thus, rendition is typically used to deliver suspects from where they were apprehended to where they will be prosecuted or to serve their sentence in their home state. Extraordinary rendition, by contrast, is not about either prosecution or incarceration in relation to where a crime has been committed or a suspect/criminal originates, but about placing detainees in locations convenient to the agency and/or country behind the detainment in terms of either deniability (that the government/agency has not detained the person in question), expediency (no need to actually charge the detainees, hence none of the usual legal guarantees), and/or freedom to “torture by outsourcing” (e.g. the CIA is not torturing detainees itself, but delivering them to places where they will be tortured with any information gathered through torture flowing back to the CIA). In addition, detainees may have been kidnapped by the CIA or another covert agency in a third country, either entirely without that country's permission or with only unofficial permission and in violation of the country's actual laws. This form of rendition does not necessarily result in torture, but doesn't rule it out either. 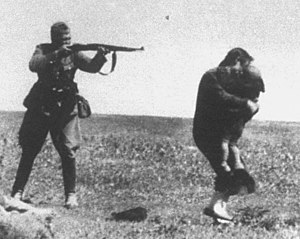 , one of the larger mass-lynchings in American history. In 2005 the United States Senate had saw fit to apologize for its historical stymieing of anti-lynching bills. It took until late 2018 for a bill, Justice for Victims of Lynching Act of 2018, to be successfully passed in the House and the Senate.[17]

In modern usage, the term "lynch mob" is often used as pejorative description of a group that gets angry at an individual, with the implication that the individual is being subjected to unfair persecution. This usage can be controversial, since some say it masks the true horror of the literal and historical lynch mobs. One of the most repugnant uses of the phrase was probably Clarence Thomas's claim that he was being subjected to a "high-tech lynching".[18]