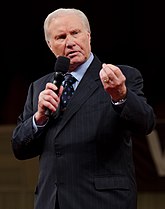 Jimmy Swaggart (born March 15, 1935) is a Pentecostal televangelist. His headquarters is called Family Worship Center based out of Baton Rouge, LA. Preacherhood came to Swaggart at an early age. He lived in church basements and held revivals in backwater rural Louisiana towns through much of the 1950s. His cousin, the famous singer Jerry Lee Lewis,

tried to help him out with a recording deal to get him out of poverty since Swaggart was a passable musician. Swaggart stupidly refused, claiming to be a "true believer," and continued onward.

In the 1960s, though, fortunes changed. After getting actually ordained by the Assemblies of God,

he put out a radio show that got snapped up by numerous radio stations throughout the Fundie Bible Belt of the Deep South. With this new influx of cash, he built his Family Worship Center, which grew exponentially over the next decades with more and more brainwashed converts. While his focus was on music and a brand of Pentecostal teachings, eventually the shows changed as the Christian contemporary music fad became more popular.

Towards the late 1980s, Swaggart appeared unstoppable. His name was mentioned in Fundie circles as "a true man of God," someone to be like, and to some an incarnation of Jesus himself. His Family Worship Center compound still takes up both sides of the block on Bluebonnet Road in Baton Rouge. His college had waiting lists to get in, filled with folks who wanted to preach the gospel like good old Brother Swaggart.

The TV evangelist served on the board (with upstanding folks like Jerry Falwell) of the American Coalition for Traditional Values, which called on politicians to sign a pledge promising never to accept campaign contributions from gay people. Later in life, Swaggart had to apologize for saying on air, “I’ve never seen a man in my life I wanted to marry. And I’m going to be blunt and plain: If one ever looks at me like that, I’m going to kill him and tell God he died.” It was all a lie joke, of course, he said. Swaggart would have to give yet another vague apology, after it was revealed he was not all that he seemed...[1]

The Fall of the Pentecostal Messiah[edit]

Jimmy Swaggart was always first on the dogpile to call out the "sins" of prominent religious figures. However, he met his match when criticizing preacher Marvin Gorman. Since having sex with someone you are not married to can cost donation money, Gorman got mad enough to hire an investigator to follow Swaggart. In the late 1980s he was photographed entering a motel off Airline Highway in a seedy section of New Orleans with a known prostitute. According to the prostitute, they did not have sex, but instead he paid her to perform "pornographic acts."[2] He has, however, been forgiven by God in a hilariously famous scene on his show. How do we know that he has been forgiven by God? Because Jimmy Swaggart went on TV a few days after he was caught to give a whiny "LOOOORRRRDDDD, I have sinnnnned against theeeee!" sermon and shed tears of repentance.[3]

For several days, Swaggart was missing from his show. When he reappeared, the show went into the realm of the bizarre. Swaggart had a self-imposed "penalty box" of sorts in a dimly lit room for his "punishment." His wife and son, Donnie, played along with this ruse in a feeble attempt to stop hemorrhaging followers and donation money. Sponsors left the show in droves. Stations dropped his show because of bad ratings. His Bible college turned into a ghost town. Of course, the Assemblies of God ended up stripping him of his ordination for two years. Not wanting to lose all that tithe money to spend on prostitutes his ministry [snicker], Swaggart responded by becoming independent. Three years later, he was caught with his proverbial pants down again!

In 1991, Swaggart was again found in the company of a prostitute. This time, it was after being pulled over for a traffic violation in California. The woman with whom Swaggart was driving alleged that he asked for sex.[4] Though nowhere near as popular and influential as he was at his height, Jimmy continues to televangelize to this day. This time, instead of an emotional confession, Swaggart told his followers, "the Lord told me it is none of your bossiness!" and stormed off.

The Jimmy Swaggart prostitution scandal broke in 1988, right around the same time as the Jim Bakker sex scandal did, and Oral Roberts made his highly specious claim that the LORD had spoken to him in his Prayer Tower and said He was going to "call him home" unless his flock sent him a certain amount of money, pronto. All these scandals hitting at once didn't seem to affect Americans' appetite for being fleeced by charlatans, however — evangelical megachurches remained more popular than ever.

But the ministry run by Swaggart would never match its former glory. His Bible College ended up losing a huge percentage of its students — so much so that many of the dorms have since been converted into utilities-paid apartments to at least draw in some income. His son Donnie Swaggart now runs what is left of the ministry with his dad making the occasional appearance. However, the compound in Baton Rouge still runs and still gains converts daily.

All in the family[edit]

Swaggart's son Donnie officially heads and does most of the sermons for the ministry. He's a DEFCON level 4 asshole. Seriously. The younger Swag makes his dad look saintly in comparison. From claiming "gay activists would love to behead Christians"[5] to shilling hard for the Rise Up Australia Party despite being on the other side of the globe, he uses his pulpit mostly as a political mouthpiece.

Swaggart's wife Frances runs a gleeful, conspiracy-filled radio program that would likely strike envy into the heart of Glenn Beck. Here's a nice little patronizing essay by her on "church segregation."

Swaggart's grandson is also following in the family tradition, corrupting the minds of Baton Rouge youth with his Crossfire Ministries.