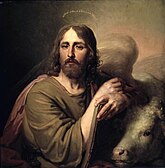 Saint Luke the Evangelist is traditionally considered to be author of the Gospel of Luke and Acts of the Apostles in the New Testament, and a disciple of St Paul of Tarsus. He is a prominent figure in Christian iconography as one of the four apostles, often depicted with a winged ox. He is regarded as patron saint of artists, physicians, and surgeons, amongst other fields. He is also sometimes considered the first religious or Christian painter, with several icons of the Virgin Mary and baby Jesus very implausibly attributed to him.[1]

There is little known about the Biblical figure of Luke. It's not clear if he was a Jew or Gentile, although he was likely either Greek or a Hellenistic Jew; the emphasis his Gospel places on evangelising gentiles suggests he may not have been Jewish himself. He is often said to have been from Antioch in Turkey, and he was possibly a physician. He traditionally died in Boeotia in central Greece and was buried in Thebes, until his relics were removed to Constantinople in 357 CE.[1][2]

He is mentioned in a few of Paul's epistles (which may not all have been written by Paul). Philemon 1:24, which is considered one of the likelier letters to be genuinely written by Paul, mentions a Luke in a list of people who say hello to Philemon. Colossians 4:14 likewise includes greetings from Luke, a "beloved physician" (whether Paul wrote this letter is debated). 2 Timothy 4:11 mentions that Luke is the only one of the disciples still with Paul (again, the authorship of this letter is doubted). Hence the sources in genuine Pauline missives are limited to the mention of the name Luke in Philemon.

See the main article on this topic: Gospel of Luke

The Gospel of Luke doesn't say anything about its author or composition, although textual evidence suggests its sources include the Gospel of Mark, the hypothetical (but widely accepted) Q gospel, and some material unique to Luke (called the "L source"). Its composition is normally dated to 80-110 CE, possibly with later revisions. There is substantial textual evidence suggesting Luke and Acts were by the same person, although who that was is far less clear. Based on tradition dating back as early as 200 CE, it has been attributed to the Luke mentioned in some of Paul's letters, however this is questioned because of differences between his accounts and those of Paul in his epistles, both doctrinally and in the descriptions of Paul's actions. The Gospel does not claim to be by an eyewitness, but Acts uses the pronoun "we" a few times, which may suggest that the author was involved in the action described, or may only have been a stylistic choice.[3]

There's also a theory that it was written by a woman, based on the large number of women featured, the important role women have, and the mention of subjects like pregnancy and menstruation that would be of greater interest to a woman.[4]

The Anti-Marcionite Prologue to the Gospel of Luke, dated anywhere from the 2nd to the 4th century CE, claims that the gospel's author was a physician who followed Paul until Paul's death, and himself died at the age of 84.

The Gospel of Luke and Acts are both addressed to a Theophilus (Luke 1:3, Acts 1:1), but it's not clear who this is: Theophilus means "lover of God" and was a common title as well as a personal name. There is a minority theory that it refers to Theophilus of Antioch

, Patriarch of Antioch from c. 169-c. 183. This fits in with the tradition that Luke was from Antioch. However it means the gospel must have been written significantly later than is usually thought (i.e. late 2nd century CE rather than late 1st century/early 2nd century); this may tie in with theories that Luke was written as a response to the 2nd-century Gospel of Marcion of Sinope, rather than the mainstream theory that Marcion copied from Luke.[5] But it could just as easily have been another Theophilus. 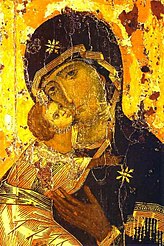 Our Lady of Vladimir (aka Theotokos of Vladimir): not painted in the 1st century CE

Luke is traditionally said to have painted the Virgin Mary with Jesus as a child. A number of surviving paintings are traditionally attributed to him, although few serious art historians would entertain this possibility. Works claimed to be by Luke include Our Lady of Vladimir in Russia, Our Lady of Czestochowa in Poland, and Salus Populi Romani in Rome; another painting, the Hodegetria kept in the Hodegon Monastery in Constantinople was lost in the middle ages although a copy survives.[6] Other sources suggest he painted even more icons, with around 8 in Eastern Europe and the Middle East including in Vilnius, Smolensk, Georgia, Kykkos (Cyprus), and Kiev, and as many as 20 in the west.[7]

It's not clear how he could have painted this presumably ordinary woman and boy long before Jesus began his ministry, especially as Luke's birth is traditionally dated to around 1 BCE making him of a similar age to Jesus (he is said both to have died in 84 CE and at the age of 84, although there may be some confusion here). One tradition attached to Salus Populi Romani holds that Mary visited Luke after the Crucifixion, bringing a table that Jesus had made in his father's carpentry studio, and Mary told Luke the story of Jesus while he painted at the table that Jesus had made; St Helena, the mother of Roman Emperor Constantine the Great, reputedly brought the painting to Rome along with some pieces of the True Cross and other relics.[8] An alternative tradition says that Luke saw an image of Mary and Jesus miraculously appear at a church in Lydda (Lod, Israel), and copied the image.[9]

Salus Populi Romani cannot be traced back any further than the 13th century and is more plausibly dated somewhere from the 8th to 13th centuries; it is housed in the 5th century basilica of Saint Mary Major, and records show the painting was being revered by the 15th century, but there is no evidence of a 1st century or middle-eastern origin.[8]

Our Lady of Vladimir (also known as the Theotokos of Vladimir) is probably 12th century in origin, and seems to have been first recorded when it was stolen from Kiev by Andrey Bogolyubsky

(aka Andrei the Pious) in 1169. It is now used as the logo of Mel Gibson's Icon Pictures.

As with many early saints, his body was divided up and parts sent throughout Christendom. His body is apparently in Padua, his head in Prague, and a rib remains in Thebes. The remains in Padua have been extensively analysed in recent times: they are of a man aged between 70 and 85, 5-feet 4-inches high and stockily built. Carbon dating placed it some time between 416 BCE and 72 CE, while DNA comparison with samples from Aleppo in Syria (near the site of Antioch) and Greeks from Attica and Crete suggested an origin closer to Antioch than Greece, so it might be Luke.[10]

In the Roman Catholic church, his feast day is October 18. He is the patron of "artists; bachelors; bookbinders; brewers; butchers; glassworkers; goldsmiths; lacemakers; notaries; painters; physicians; sculptors; stained glass workers; surgeons."[11] His feast can be celebrated by eating beef (because his emblem is a winged ox), and raisin Banbury Tarts.[11]

St Luke's Summer is a period of warm weather around his feast day.