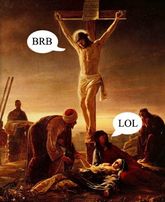 So wrong. So wrong.

Easter is a wonderful time of year. It is marked by an anthropomorphized rabbit that brings chocolate and pastel coloured eggs to all of the little Christian boys and girls of the world. Easter also has something vaguely to do with Jesus.

Easter is basically the ultimate BDSM holiday for Christians. They get to watch (or imagine) their God getting whipped almost to death. Then He has to drag the cross upon which He will be tied and left to die upon up a hill, where it will be planted in the ground, and He gets tied up on it. Then He suffers for your sins for many steadfast hours. In the end he chickens out (it would take much longer for a human to die under such circumstances — such was the nature of Roman crucifixion[notes 1]) and commends his spirit back to his Dad. A couple of days later (three, supposedly — the whole Good Friday thing is badly interpreted) he lumbers around, and shows a few (hundred?) friends his nail wounds. This is the mythical equivalent of swimming in freezing water, and other 'extreme' sports.

After thousands of years, people still are awed by "stigmata" (which, by the way, is an awesome song).

Two Easters for the price of one![edit]

Eastern Orthodox Christianity celebrates Easter after the Roman Catholic and Protestant churches, not just so they can buy their chocolate rabbits and marshmallow Peeps on sale but because they still use the Julian calendar as opposed to the Gregorian calendar. The Soviet Union celebrated "Red October" in November for similar reasons.

According to the King James Version of the Bible, even Jews like King Herod celebrated Easter for a time!

Acts 12:3-4 And because he saw it pleased the Jews, he proceeded further to take Peter also. (Then were the days of unleavened bread.) And when he had apprehended him, he put him in prison, and delivered him to four quaternions of soldiers to keep him; intending after Easter to bring him forth to the people.

There are a whole bunch of Protestant fundamentalists on the internet and outside it who adhere to a wacky conspiracy theory that Easter was invented in ancient Babylon by Nimrod (the same Nimrod from Genesis 10:8-10) and his wife Semiramis. They claim that the holiday was originally a festival of the Babylonian goddess Ishtar, whose name they say was pronounced "Easter," who was really Semiramis herself. They claim that Nimrod was killed by an enemy and his body was chopped up and scattered across the world. Then, supposedly, Semiramis gathered together the different parts of Nimrod's body and reassembled them — except for his penis. Then, Semiramis claimed that, without Nimrod's penis, he could not be brought back to life. Then, through the intervention of the Sun-god Baal, Semiramis became pregnant with a son, Tammuz, whom she claimed to be virginally conceived. Then, after he was born, Semiramis declared herself to be the goddess Ishtar incarnate and her son to be the reincarnation of Nimrod. Then, Tammuz was killed by a wild boar and Semiramis/Ishtar declared that, from then on, all people should celebrate the day of his death with a new holiday, which was called "Ishtar." They claim that the ancient Babylonians celebrated the holiday by painting eggs, eating sacred cakes with the letter T written on them for "Tammuz," and eating a ham dinner. They also claim that the religion worshipped rabbits.[notes 2]

In reality, however, all of this is complete nonsense. The whole conspiracy theory was started by the 19th century pseudohistorian and Protestant pastor Alexander Hislop, who wrote a book called The Two Babylons claiming that the Catholic Church, and all of the holidays associated with it, was directly descended from a nonexistent ancient Babylonian mystery cult.[1]

The whole origins story involving Ishtar and Tammuz is a cobbled-together Frankenstein's monster, taking bits and pieces from countless different mythologies and putting them all together, mixed with a ton of wild assumptions. There is no record whatsoever of the ancient Babylonians having ever celebrating any holiday called "Ishtar." Nimrod probably never even existed since he is a just a character torn straight from the pages of Genesis. Semiramis may or may not have existed, but if she did exist, she would have lived during the 7th or 8th centuries BCE, thousands of years after the time when Nimrod allegedly lived. Likewise, there is no evidence that the Babylonians ever celebrated any holiday by painting eggs or by eating ham dinners. The story about the so-called "sacred cakes" is especially stupid since the Babylonians did not even use the Latin alphabet, meaning that the idea of them eating cakes with the letter T on them for "Tammuz" is totally ridiculous. The name "Ishtar" is pronounced exactly how it is spelled. The words "Easter" and "Ishtar" do indeed sound quite similar, but they are totally etymologically unrelated.

Nonetheless, in spite of the fact that Hislop's whole thesis has been repeatedly debunked as pseudohistory,[2] this has not stopped the radical fundamentalists from propagating and using it not only to attack Catholicism as noted above but also Paganism in general, despite religions with a mother goddess existing since long before Babylonians and/or very far away from there. Their relentless propagation of these debunked pseudohistorical claims has, unfortunately, been highly effective. On March 27, 2013, the Richard Dawkins Foundation for Science and Reason shared an image on their official Facebook page peddling the exact same bogus conspiracy theory that Protestant evangelicals have been peddling for over a century.[3] Thus, what had previously been nothing but a crazy conspiracy theory devised by a 19th-century nutjob pseudohistorian became a widely propagated idea among otherwise mostly rational people.

The Real Origin of "Easter" and the "bunny"[edit] 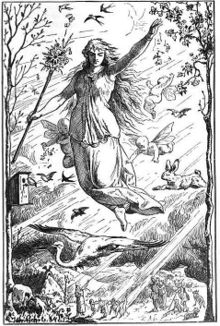 Ostara (1884) by Johannes Gehrts. Ironically, basically everything in this drawing is totally made-up. Bede never says anything about Ēostre being linked with bunnies, eggs, or even the sunrise and she isn't mentioned by any other authors. None of that seems to matter, though, because the Romantics didn't really care about little things called facts.

The Venerable Bede, who had an unfortunate habit of just making shit up, states that the festival of Easter was named after the ‘old observance’ of Ēostre’s feasts during the month of Eosturmonath. He does not say that anything survived of these feasts except that name. And two lines of Bede is our sole source for a goddess called Ēostre. Many pagans have uncritically adopted these positions such as the Easter bunny being a companion of Eostre as a reaction to the 'Christians stole our festivals' popular narrative.[4][5]

Jacob Grimm, in the 19th century, reconstructed (that is, had no direct evidence of) a Germanic goddess called Ôstara. Adolf Holtzmann, writing in 1874 in German Mythology, states "The Easter Hare is unintelligible to me, but probably the hare was the sacred animal of Ôstara." But even Holtzmann was using "probably" in the sense of "sounds like a plausible story to me" — Satyrae Medicae XX (1722) includes a chapter on Easter and mentions the Easter Hare (Osterhase) as a local Westphalia custom: adults leave painted eggs amongst the trees for the kids to find. No goddesses, just a local tradition.

The word used for "Easter" in most European languages is a cognate of "Pesach": Spanish "Pascua", French "Pâques", Italian "Pasqua", Russian "Pasha" (Пасха), Modern Greek "Pascha" (Πάσχα), Turkish "Paskalya", even the Dutch and Swedish "Pasen" and "Påsk" and the Irish and Welsh "Cáisc" and "Pasg". In a few languages, such as Spanish, the phrase used for Passover even translates to "Jewish Easter." This is not to say that elements of preexisting mythologies don't enter into the festival, but these mostly come via English and American influence, as befits a Zoroastrian corruption of Judaism filtered through a Platonist lens.

But, according to the video below, there may be another explanation for the Easter bunny. And why dogs can't eat chocolate. (Who knew?) 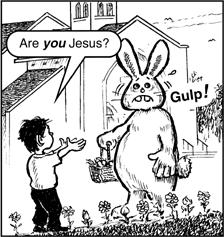