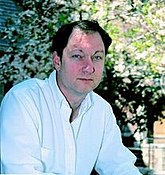 John Richard Lott Jr. (1958–) is an economist known mainly for his "research" claiming to prove that less restrictive gun laws reduce crime. He originally attracted public attention with a study he co-authored with fellow economist David Mustard that was published in the Journal of Legal Studies in 1997 claiming to prove that "right-to-carry laws", which make it easier for people to obtain concealed weapons permits. Shortly before the study was published, Lott testified in front of Nebraska lawmakers claiming that the study proved that right-to-carry laws reduce violent crime.[1] Debunkings swiftly followed: the very same year, an article in the American Journal of Public Health pointed out that "Several serious flaws in the study render the authors' conclusions insupportable."[2] A reanalysis of the Lott and Mustard data published in 1998 by Black and Nagin found "no basis for drawing confident conclusions about the impact of right-to-carry laws on violent crime".[3]

Lott followed this study with a book entitled More Guns, Less Crime, first published in 1998, with new editions following in 2000 and 2010. Despite additional debunkings of the claims in this book, by everyone from Stanford and Yale researchers[4] to computer scientist Tim Lambert[5] Lott continues to insist that he is correct about more relaxed concealed carry laws increasing public safety. In 2003, he admitted to having invented the pseudonym "Mary Rosh" to argue with his critics online (including Lambert) over the previous three years, after being criticized for being unable to provide data from, or basic information about, a survey he claimed to have conducted.[6][3] Lott has claimed his son, under that pseudonym, wrote a raving review of his More Guns, Less Crime book.

In 2013, Lott founded a phony "think tank" called the "Crime Prevention Research Center", through which he has excreted numerous methodologically shoddy non-peer-reviewed papers onto the Social Science Research Network

on all manner of pro-conservative topics, ranging from police supposedly not being racist[7] to undocumented immigrants supposedly committing crime at super-high rates[8][9] to the 2020 U.S. presidential election supposedly being rife with fraud.[10]

And if you're still doubting his overall credibility, he's a climate change denier.[11] He wrote an op-ed on Fox News detailing the Climategate "scandal". He was fixated on the "to hide the decline" aspect, which he probably assumed was a temperature decline and not decline of tree ring density, but he also littered a bunch of quote-mined discussions from scientists, such as the "The fact is we can’t account for the lack of warming at the moment and it is a travesty that we can’t." quote from Kevin Trenberth.