Nation of Yahweh is a black separatist cult founded by Yahweh ben Yahweh (1935-2007; born under the rather less catchy but more believable name of Hulon Mitchell, Jr.; he also called himself Grand Master of All, the God of the Universe, the Grand Potentate, the Everlasting Father and the persecuted Messiah).[1]

Yahweh (the above-mentioned kook, not the deity) believed that blacks are the true Israelites, and that he was a messiah sent to free black people from "white devils".[1]

During the 1980s the group was investigated in connection to 23 murders around Miami, Florida, including a decapitated temple dissident and several dead white people who had had their ears cut off.[1] In November 1990 Mr. Yahweh and some of his followers were indicted with 14 killings, two attempted killings, arson and extortion. According to the charges, the group killed former members, and also practiced an initiation rite which involved killing a white person and giving one of their ears to Yahweh. Yahweh ben Yahweh was convicted of conspiracy to commit murder in 1992.[2]

The Nation of Yahweh today[edit]

Despite its founder's death, the group is still active. Its website, insisting that there was no evidence of the crimes, refers to Yahweh's arrest as "the crucifixion" and part of "a 25-year FBI practice of disrupting and discrediting black organizations".[3] The site also states that "white people can be delivered from the consequences of transgressing" God's laws.[4] Even with the racism toned down, however, they're still pretty dang kooky. 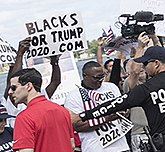 Michael the Black Man in his favorite location