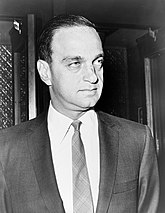 Roy Marcus Cohn (1927–1986) was a lawyer, a rabid anti-communist, a closeted[2] homosexual[3] and homophobe,[3] a Jewish anti-Semite,[3] a misogynist,[3] and a quintessential DINO (a registered Democrat who almost exclusively supported Republicans).[4] His career spanned from the beginning of the Second Red Scare up through the beginning of Trumpism.

In 1948, Cohn was hired on the same day he passed the bar exam by Irving Saypol, US Attorney in New York, allegedly with the help of family connections.[4] During his time in the Attorney General's office, he prosecuted in 1949 eleven members of the Communist Party USA leadership, including Gus Hall, under the Smith Act.[5] In 1950, he prosecuted Soviet spy William Remington

who had been a Commerce Department employee.[6]

In 1951, Cohn had a prominent role in the prosecution of the Soviet spies Julius and Ethel Rosenberg.

Cohn may have engaged in improper behavior during the Rosenberg trial by urging the death penalty during ex parte discussions with the judge.[7] The trial itself was marred by judicial and legal improprieties, many on the part of Cohn.[8] What a commie!

Following the Rosenberg trial, Senator Joseph McCarthy hired Cohn as his chief legal counsel, based on the recommendation of FBI Director J. Edgar Hoover. Both Cohn and McCarthy were instrumental in initiating the Lavender Scare,

which was persecution of closeted homosexuals within the federal government based on the belief that they were easily blackmailed by Soviet agents.[9][10] The scare became official government policy in 1953 when President Dwight D. Eisenhower signed Executive Order 10450 and did not end until 1995 when President Bill Clinton rescinded the order.[9][10]

After being hired by McCarthy, Cohn invited his friend G. David Schine,

an anti-communist propagandist, to join the staff as a consultant. After Schine was drafted into the Army in 1953, Cohn sought unusual special treatment for Schine, which led to unsubstantiated rumors that Cohn and Schine had a sexual relationship. The requests also led to the Army–McCarthy hearings of 1954, in which the Army accused both Cohn and McCarthy of using improper pressure on Schine's behalf. To counter this accusation, Cohn and McCarthy naturally accused the Army of harboring communists.[11] The hearings led to increasing public disapproval of McCarthy,[12] McCarthy's censure by the U.S. Senate[13] and downfall, and the resignation of Cohn from McCarthy's staff to avoid being fired.[14] What a poof.

Reagan, Murdoch and Cohn meeting in the Oval Office in 1983

After his resignation, Cohn spent the rest of his career in private practice in New York. His clientele included major mafia figures (Tony Salerno,[15] Carmine Galante,[16] John Gotti and Carlo Gambino[17]) as well as other high-profile clients.

Cohn served as Donald Trump's attorney from 1973-1978, during which time the Justice Department accused Trump of violating the Fair Housing Act by discriminating against African Americans in 39 of Trump's buildings.[18] Cohn unsuccessfully countersued the Justice Department, and the case was settled out of court.[18] More importantly for Trump, Cohn served as a nexus for introductions to important people in Manhattan, including mafia figures who, at the time, controlled parts of the building construction business.[19] Cohn also tutored Trump in some his strategies, e.g. attack one's accuser, how to be a deadbeat, and how to set up the audience for the big lie.[19] Cohn also introduced Trump to former Nixon henchman and future Trump sycophant Roger Stone and to media mogul Rupert Murdoch.[19]

After the statute of limitations had expired, Stone claimed that he had been a bagman for Cohn's bribery of the Liberal Party to endorse John B. Anderson as a third-party candidate in the 1980 Presidential race.[19][20] This was likely done under the false impression that Anderson would be a spoiler candidate who would have hurt Jimmy Carter's chances against Ronald Reagan; Anderson's supporters turned out to be about equally split between Carter and Reagan.[21]

Murdoch would later create Fox News, to which Trump became unhealthily addicted. Cohn arranged for Murdoch's first meeting with Reagan (whom Cohn had been acquainted with since the Red Scare days) in the White House and made other arrangements between Reagan and Murdoch. Murdoch's taking American citizenship, as well as the elimination of the Fairness Doctrine

and the Reagan Administration's relaxation of media monopoly regulation, directly led to the rise of Fox News.[22]

Not only did Cohn advise mobsters, mobsters apparently advised him. For example he routinely subjected his employees to potential criminal liability according to one of the lawyers in his firm:

Cohn had many legal troubles of his own, including non-payment of as much as $3.18 million in taxes to the IRS and Federal government charges of conspiracy, bribery, and fraud, for which he was acquitted.[4] Cohn claimed that people had personal vendettas against him (Robert F. Kennedy and US Attorney Robert M. Morgenthau,

in particular),[4] which may have been either a persecution complex or for good reason since he had personally ruined so many innocent lives during the Red Scare and the Lavender Scare.

Eventually, however, Cohn was disbarred from practicing law in June 1986.[25] The charges against Cohn included 1) misrepresenting a will to his dying client; the will included Cohn as an executor; 2) not returning money to clients; and 3) some rather shady dealings in connection with the sinking of a yacht.[4]

Cohn was closeted until the very end, claiming that he was terminally ill from liver cancer when, in fact, he died from AIDS in August 1986.[4]