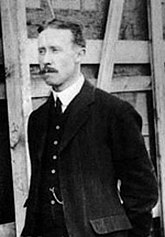 John William Dunne (1875–1949) was a British engineer and author. He was best known for his ideas about the nature of time.

Dunne wrote that people could experience precognitive dreams and enter the future in a dream state. After experiencing a number of dreams Dunne proposed a new hypothesis that linear time was an illusion brought about by perception in consciousness. Dunne proposed that the past, present and future all in fact occur simultaneously. He is most well known for his book An Experiment with Time (1927). He also wrote that an infinite regress, or series of dimensions exist within time and that life is immortal as it exists in each of these dimensions infinitely. He also wrote The Serial Universe (1934), The New Immortality (1938), Nothing Dies (1940).

Recent paranormal writer Anthony Peake has attempted to update the ideas of Dunne.

Dunne was an engineer with some interesting ideas, but it was revealed he was a spiritualist and medium. Scientists have doubted some of his claims, especially those about precognition which could never be proven with science.

Scientists such as Paul Davies have written that there is no scientific evidence for more than one time and that Dunne's argument seems ad hoc.[1]