Hippolyte Baraduc (1850–1909) was a French physician and parapsychologist. He is most notable for his claim that a misty form leaves the human body at the moment of death which he believed was evidence for the soul. 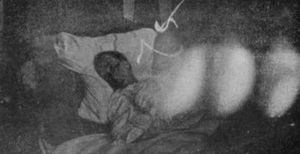 Photo taken by Baraduc of his wife Nadine 20 minutes after her death. The photo shows a misty form which Baraduc believed was his wife's soul leaving her body.

According to Baraduc, at the moment of death a misty form will leave the body, taking a vague shape and then disappearing. Baraduc believed the misty form to be the departing soul.

Baraduc's wife Nadine became ill in 1907. He set up photographic material at his wife's bedside where he waited with her to pass away. Just after her death he had taken a photograph which revealed three misty forms floating above Nadine. Baraduc took another photograph fifteen minutes later and the three misty forms had formed together into a large luminous white ball. Baraduc later claimed the ball floated away and disappeared.

Baraduc wrote that human thought, characteristics of the mind and the soul projects itself in a form into space. Even though Baraduc was certain he had photographed the soul, others have not been convinced. Some professional photographers have suggested that the effect observed in his photographs could have been caused by tiny pinholes in the bellows behind the lens of the camera.