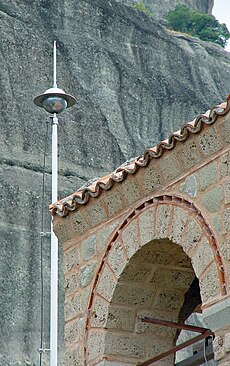 A lightning rod or lightning conductor is a strip of highly conductive metal attached to the roofs of tall buildings, leading down their sides into the ground. Its purpose is to protect the building from lightning strikes that could otherwise cause serious damage.[1] The term has been adopted for some political usage, although the definition used is based on the misconceptions of how lightning conductors work - that they actively attract, rather than safely diffuse, lightning strikes.

Some religious communities such as the Amish hold that building owners should refrain from installing such protection on their property as lightning strikes are a manifestation of god's disfavor.[citation needed] That god may have demonstrated favor towards such a famous rationalist as Benjamin Franklin by inspiring him to invent it, remains unaddressed.

In modern political usage, the term has been adapted to mean a person who espouses a particularly strong version of some idea in order to attract the energies and efforts of the opposition. Normally, their views are not taken seriously by the more moderately positioned people on their own side of the political spectrum, but they are often appreciated for the distraction they provide, or the apparent sane light that they show their moderate counterparts in.