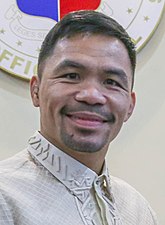 The People's Champ, at least according to them.

Emmanuel Dapidran Pacquiao Sr. (local pronunciation: [pɐkˈjaʊ]; (1978–) is a Filipino politician and former professional boxer. Nicknamed Pac-Man (not to be confused with the other Pac-Man

, though he did deny that his nickname was derived from the Namco mascot), he rose from poverty to become the only eight-division world champion in the history of boxing, has won twelve major world titles, is the only boxer to win world championships across four decades (1990s, 2000s, 2010s, and 2020s), and has taken on a Barbie

-level laundry list of side careers from acting to being a basketball coach among other things. Pacquiao entered politics well into his boxing career in 2010, when he was elected as the representative of the Province of Sarangani and was later elected as a senator in 2016, juggling between his duties as a politician and as a boxer (though given his numerous absences from the Philippine legislature, he leaned more towards the latter). Pacquiao retired from boxing in 2022 in a bid to further pursue his political ambitions, and unsuccessfully ran as presidential candidate in the 2022 Philippine presidential election.

Much as how Scientology took Tom Cruise's life for the worse, Pacquiao's life is a tragic tale of how an otherwise skilled and talented boxer has gone completely batshit insane through being swayed into religious fanaticism and zealotry, as well as fiendish crooks within the Philippine sociopolitical elite puppeteering him into less-than-noble pursuits such as politics.

Originally raised as Roman Catholic (his equally eccentric, nouveau riche mother Dionesia Pacquiao being a devout parishioner for one), Pacquiao converted to Evangelical Protestantism in the early 2010s, claiming that he had a vision where he saw a pair of angels and heard the voice of God, leading him to engage in Bible studies and wean off of his vices. While it did convince him to turn over a new leaf and to exhibit a more humble demeanour compared to his fellow prizefighter colleagues such as Floyd Mayweather Jr.

(who was reviled even by his African-American compatriots notably after his bout with Pacquiao[1]), Pacquiao's turn to born-again Christianity nevertheless raised eyebrows especially in light of his outspokenness and zeal towards his newfound ideology, particularly the conflict between Christian aversion to violence[note 1] and the gladiatorial nature of combat sports,[3] as well as his sociopolitical views. Some have slyly joked that the numerous blows to his head during his boxing career may have either accounted for the delusion vision or otherwise driven him into making bombastic statements regarding his religious views.

Homosexuals are "worse than animals"[edit]

Pacquiao generated furore in 2016 when he made a statement in Tagalog about his views on same-sex marriage, opining that those who have engaged in it are "worse than animals". Unsurprisingly, this did not sit well with the LGBTQ+ community, especially in his native Philippines, where prominent local LGBT celebrities — namely Vice Ganda,

– took umbrage and and condemned his statements,[6] with Vice Ganda pointing out the boxer's hypocrisy by way of his previous extramarital affairs. Pacquiao was initially defiant and continued his show of force as a Bible thumper, citing 1 Corinthians 6:9, but later back-pedalled and issued an apology, though he still reaffirmed his stance and argued that same-sex marriage is contrary to biblical teaching.[7]

Pacquiao's comparisons with homosexuals to animals is not factual: homosexual behavior is widespread among mammal and bird species.[8] His statements were also condemned by some as a form of cherry-picking and an ad hominem attack towards those whom he does not agree with, particularly with the phrase "but I’m not condemning them. Just the marriage" contradicting with "worse than animals".[9] As a result of the scandal, sports apparel company Nike dropped him as an endorser,[10] and Pacquiao was also banned from entering The Grove

It should be noted however that Pacquiao's opposition to same-sex marriage is par for the course in the Philippines, whose population is predominantly religiously conservative; while public opinion towards LGBT rights have become increasingly positive in recent years as evidenced by growing participation in pride parades and other LGBT-centric events, the Catholic Church's influence and vehement opposition towards progressive policies served as a barrier for LGBTQ+ groups to be accepted by society.[12]

On raising his family[edit]

In an interview with Boy Abunda,

Pacquiao's wife Jinkee recalls having used a stick with a Bible verse inscribed on it when administering corporal punishment on their children.[13] Besides the obvious controversies regarding the practice of spanking one's offspring (though it remains legal in the Philippines), the idea of putting a Bible verse on a cane does reek of undue religious indoctrination especially given the Pacquiaos' born-again ideology.

The matter of life and death[edit]

Pacquiao has voiced his vehement opposition against abortion, even in cases of rape victims who were impregnated against their will.[14] Perhaps paradoxically, he also initially voiced his support for the death penalty,[15] but later took a step back from it when he stated in an interview that judicial reform should be implemented first before capital punishment is reinstated. Pacquiao was previously criticised by local Catholic Church authorities for using the scripture to advance his death penalty agenda.[16]

(An attempt at) knocking some sense into him?[edit]

Sleeping on the job.

In what is perhaps one of the lowest points in his career, Pacquiao suffered a humiliating defeat in 2012 when Juan Manuel Marquez

knocked Pacquiao out on the sixth round, landing face-first onto the canvas after receiving a right hand to his mouth.[17] Pacquiao's defeat became something of a cause célèbre for Catholic apologists who questioned his sudden religious conversion, particularly when he gave up on his previous practice of carrying the rosary and making the sign of the cross before a fight.[18][19] Dionesia also launched a similarly heated and bombastic tirade against "those Protestant pastors" whom she perceived as having corrupted her son's faith through incessant Bible study sessions that she believes has affected his career.[20] Pacquiao later pleaded his critics to leave religious matters out of what had happened, maintaining that his defeat had nothing to do with his switch to evangelicalism.[21] To Pacquiao's credit, he did win a few more bouts since then, scoring a knockout against Lucas Matthysse

If one nutter like Pacquiao isn't enough entertainment for you, some wingnut blogger took to his webshite to shoehorn the boxer into the ever-expanding Illuminati lore, particularly the so-called 201 New gematria conspiracy for some reason.[23]