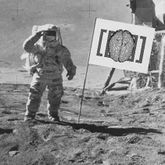 It's just a dusty chunk of rock in the sky space. We checked.

The lunar effect is the pseudoscientific belief that behavior (usually deviant) correlates with the phases and position of the moon. Some people claim that the Moon affects the water in your body the same way it affects tides.[1][2][3] This is not true at all.[4] The word lunatic derives from the belief that staring at the full Moon could cause one to go mad.

In the 1880s, Charles Hyde of England successfully avoided murder charges by claiming that the full Moon caused him to go crazy.[5]

Many scientific studies[Which?] have been done to test the validity of the claim, and it has consistently failed to hold up to scrutiny:

Traditionally, moonlight is considered "romantic" — that is, conducive to gettin' it on. This may be because dim light hides your sweetie's physical imperfections, or it may be because it scares away the leopards. (The alleged link between the lunar cycle and the menstrual cycle is another matter.)

This association between a moonlit night and a night of passion may be where some of the legends of "lunacy" come from. At the height of the Victorian period, being turned on was considered taboo outside of the marriage bed, and it only takes a small leap of the imagination to go from "burning with lust" to "insane."

Without doubt, the full Moon can wake people up from sleep.

The full moon is bright enough to allow people to do rudimentary activities. People are more likely also to be awakened by the light of a full Moon and see any strange activity. It also allows people to do sane activities, as the term "harvest moon" expresses. A full moon extended the time into the night in which people could harvest crops as the nights began earlier, at least in the time of horse-drawn vehicles. (This might not be so safe with motorized equipment, but such involves the dangers of using heavy equipment in poor lighting).

The effect is the result of the sunlight reflected off the full Moon and no other physical cause upon human behavior. More people out and about trying to do things on the sly but more people out to see things done on the sly implies more likelihood of something strange being done — and being seen.