A popular remedy for lacking blindness.

Sungazing is the practice of purposely staring directly into the Sun — something we very much hope your parents, your science teacher, or at least your common sense told you specifically not to do.[1] 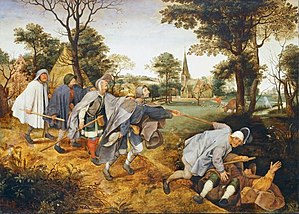 Proponents of some New Age movements, ostensibly drawing on Eastern philosophies, claim that humans can absorb the Sun's energy directly and efficiently through their eyes by staring into the Sun for extended periods. This lacks any scientific explanation since the eye does not have any means of photosynthesis and so cannot convert light into usable energy. While photons striking the retina do cause chemical reactions that are then detected by the optic nerves, which are interpreted by the brain as sight, the body does not and cannot harvest that energy. The closest that the Sun has in providing nourishment for our body is that sunlight can cause the production of vitamin D.[2] However, you do not need to bring your eyes anywhere near the sun for this to happen since vitamin D is made in the skin.[2]

Nevertheless, some sungazers claim that they are able to survive without food, since they obtain all their "nourishment" directly from the Sun. This is a form of breatharianism (or inedia), a belief in survival without eating, a concept wholly rejected by the scientific community (and any other community with an ounce of common sense). While Superman does get his powers from Earth's yellow Sun, he's an alien from the planet Krypton, not a human being.[3] Even plants, which do photosynthesise, require other nutrients for survival.

Leading sungazers and breatharians have seriously proposed sungazing as a solution to world hunger and other global problems.[4][5] While it would in fact address certain problems (namely those centred on the continuing existence of breatharians), world hunger is unlikely to respond to this approach.

Currently, none of the sungazers' claims to obtain energy from sunlight or survive without food have been verified or reliably tested. Sungazers often also claim to achieve spiritual enlightenment by sungazing, a concept much less testable.

Due to the potential damage to the human eye,[6] sungazing activities are usually confined to the times after sunrise or before sunset when the sun is at its least bright, although some experienced practitioners have sungazed for long hours at other times of day.

In 2009, several Roman Catholic sungazers, who were hoping to see divine visions of the Virgin Mary rather than adhering to any of the New Age beliefs mentioned above, were treated for severe eye damage.[7]

Don't look at the bright light with naked eyes. Ever! This is taught in "Welding 101". Welders use eye protection. So should you, if you decide to look at the Sun.

It really isn't a good idea. Staring at the Sun is one of the things your mother told you not to do that really can make you go blind.[8] Best to stick to the other ones which won't.

If you really want to see the Sun (say, to view sunspots or watch an eclipse), you can use a telescope to project an image of it onto a white surface. Lacking that, you can use a pair of binoculars (and mount it on a tripod, if you have one) and use those to project onto something light, bright, or white. A sheet of paper works well. If you prefer not to use a projected image, you could also use a purpose-made telescope solar filter in order to view it in the eyepiece. You can view it without magnification with eclipse glasses (made by a reputable manufacturer) or welding glass (shade 12 or darker).