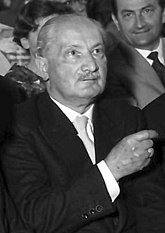 Heidegger notices something interesting on the ceiling.

and existentialism, although his thinking should be identified as part of such philosophical movements only with extreme care and qualification. His ideas have exerted a seminal influence on the development of contemporary European philosophy.[1]

Born in the rural, religious town of Meßkirch, Germany, Heidegger was greatly influenced by his upbringing and would hate technology, cities, and pop music for the rest of his life.[2] He went on to study theology at the University of Freiburg, but after two years in 1911 he swapped majors to philosophy. He started teaching philosophy in 1915 and married Elfride Petri in 1917.[1] Two inverse stopped clock moments happened in his life: his affair with Hannah Arendt

in the 1920s and his joining of the Nazi Party in 1933. While he stopped attending Nazi activities in 1934, he remained a member until the party's dismantling, never openly apologized for his involvement apart from calling it "the greatest stupidity of his life" ("die größte Dummheit seines Lebens"), and it still remains a highly controversial aspect of his life and philosophy. He died in 1976, and is buried in Meßkirch.

Heidegger's magnum opus Sein und Zeit (Being and Time) is a long, tedious book that we can't recommend reading (unless you have a brain the size of a planet, in which case, be our guest[citation NOT needed]) because of its various neologisms and, like, impossible prose. We'll summarise it for you (you're welcome). It was written in 1927 and is largely considered influential (apparently it's had impact on architecture? We're not totally sure, but we'll take Stanford's word for it[1]).

His work has four main points, and we'll cover them super briefly.

One: we've forgotten to notice that we're alive[edit]

It's worth mentioning here that while we know it in theory (obviously you need to be alive to be reading this), Heidegger asserts that we aren't properly in touch with the 'Mystery of Being', the mystery of what Heidegger would term das Sein, or Being with a capital B. Much of his time is devoted to trying to wake us up to the strangeness of living on this tiny planet in a seemingly uninhabited, silent universe.[2]

For Heidegger, the modern world is an infernal machine dedicated to distracting us from the basic wondrous nature of Being. It constantly pulls towards practical tasks, it overwhelms us with information, it kills silence, it doesn't want to leave us alone – partly because realising the mystery of Being has its frightening dimensions. Doing so, we may be seized by fear ('Angst') as we become conscious that everything that had seemed rooted, necessary and oh-so-important may be contingent, senseless and without true purpose. We may ask why we have this job rather than that one, are in a relationship with one person rather than another, are alive when we might so easily be dead… Much of daily life is designed to keep these odd, unnerving but crucial questions at bay. What we're really running away from is a confrontation with – and even non-German speakers might respond to the sonorous depth of this key Heideggerian term – ‘das Nichts’ (The Nothing), which lies on the other side of Being. The Nothing is everywhere, it stalks us, it will swallow us up eventually, but – Heidegger insists – a life is only well lived when one has taken Nothingness and the brief nature of Being on board – as we might do when, for example, a gentle evening light gives way to darkness at the end of a warm summer's day in the foothills of the Bavarian alps.[2]

Two: we've forgotten that all being is connected[edit]

Enter woo filled theories misquoting Heidegger. In essence, Heidegger says that all being is connected by the fact that everything is existing. We are 'connected' with the clouds in the sky and the rocks five metres away because we all are in the state of existing.

Three: we forget to be free and live for ourselves[edit]

Self-explanatory. Basically, Heidegger realised that we spend a great deal of our time trying to please a world that, if we're being honest, probably doesn't really like us that much in the first place, or at least doesn't notice us. Heidegger, therefore, wants us to start living for ourselves and to stop living for the world.

Much about us isn't, of course, very free. We are – in Heidegger’s unusual formulation – 'thrown into the world' at the start of our lives: thrown into a particular and narrow social milieu, surrounded by rigid attitudes, archaic prejudices and practical necessities not of our own making.[2] Heidegger begs us to break away from das Gerede (the Chatter) in the world (things like news and social media and constant inflows of information) that fills our minds and distracts us, and begs us to break away from the masses (what he termed the they-self as opposed to ourself).

Four: we treat others as objects[edit]

In essense, Heidegger asks us to treat other people as the ends, not the means. Heidegger notes that most of the time we treat others as equipment to help us meet certain ends, and asks that we think about the fact that the person over there is another person, who feels and loves and thinks and has goals like we do. They aren't just a tool, they're another being.