Allegory of the cave 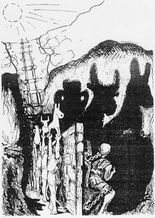 Illustration of the allegory.

Plato recounts the allegory of the cave in The Republic to illustrate his conception of the nature of truth. In the allegory, Plato describes a group of prisoners who have spent their entire lives in a darkened cave. The prisoners can see the wall of the cave which has shadows intentionally cast on it by puppeteers. The prisoners' knowledge of the world is limited to these shadows on the wall. One prisoner escapes and sees the sun in the outside world for the first time, which nearly blinds him. Plato supposes that, should the freed prisoner return to his fellow captives and attempt to describe the outside world, the other prisoners might reject him.

The allegory describes Plato's conception of reality. Humans appreciate everyday objects through their senses; however, those objects are only "shadows" of the true "forms", a concept Plato develops throughout his writings. Knowledge of the forms is the equivalent in the allegory of being released from the cave and seeing the world itself rather than mere shadows of the world.

Plato begins by describing the cave. The prisoners, chained to the wall, pass the time with guessing games about the shadows on the wall. The shadows are all they know about reality, and whoever is good at telling stories about them or guessing which shadow comes next will be regarded as having higher status.

One day, a prisoner is dragged out of the cave and into the light. At first, the prisoner is shocked and confused, his eyes unused to the brightness, and he rejects reality because it is so unlike what he is used to. But eventually, he adjusts and decides to explore the real world.

The free man goes back into the cave to tell the fellow prisoners about the real world. They laugh at him as he stumbles in the dark. Refusing to question their own beliefs, they dismiss his stories as insanity and tell him to shut up. His educated beliefs may be annoying, and they may feel insecure or hostile towards him, even becoming violent.[note 1] Consider what Jesus says in Luke 4:24: "Truly I tell you, no prophet is accepted in his hometown."

Plato believed that the senses and empirical knowledge were essentially misleading. True knowledge, according to Plato, comes from abstract knowledge gained through the intellect. You start with confusion and then try to work out the answer.

Thus, a good teacher is not someone who puts knowledge into your brain, but someone who turns you towards the light and encourages you to go explore. People are born with the ability to learn; they simply need to make the effort. A teacher should be a guide, not an authority figure.

Plato held a somewhat un-democratic belief that only a few people should go out of the cave — intellectuals who expressed curiosity and a strong desire to learn. These people deserved a rigorous education, while the rest didn't need to know much. Then, these well-educated people, having seen "reality," should "go back into the cave" and preside over the people who didn't understand anything. This somewhat dim view of humanity may have been shaped by Socrates' execution for the crime of being annoying.

Plato also discussed the two "types" of confusion: the confusion of an ex-prisoner seeing the light for the first time, and the confusion of an enlightened prisoner stumbling around in the dark due to no longer being accustomed to it. Plato believed that a wise person should be aware of the difference between the two.

Plato essentially believed that there are four "levels" of knowledge. Speaking allegorically, the first one is the shadows of the objects the prisoners see; the second is the objects themselves seen in the dim light of the cave; the third is the objects seen in clear daylight; and the fourth is an up close examination of the objects. The former two stages are considered 'below the line' and the latter are 'above the line'

Plato believed that each of these stages is directly analogous to a state of knowledge of anything in the real world. Take the concept of a circle for instance, a primitive understanding involves a crude and rough outline of a shape similar to a circle. At this level, The next understanding would involve an ability to draw the circle with a compass. The first stage above the line involves knowledge of all the formulae involved with the circle and pi and trigonometry, etc. The last stage is the form of a circle, from which all other understandings derive. As humans, Plato assumed we are not capable of reaching this level of understanding.

Plato applies his own allegory[edit]

Now all of this is only moderately interesting until we examine the book we find the allegory in - The Republic. The Republic is actually a work that analyzes a subject, namely justice, through these four levels of knowledge and provides an analysis at all stages.

In the opening stages of The Republic, Socrates (speaking for Plato) asks what the definition of justice is. Cephalus gives a rather basic answer — "speaking the truth and repaying debts". Socrates is able to demolish this argument as extremely inadequate through the use of counterexamples. Polemarchus improves the argument somewhat, but the argument is clearly inadequate due to its reliance on fixed and definite rules. This is the primitive notion of justice, simple and sufficient for simple societies, but as a society develops, more is required.

Next, Thrasymachus enters the discussion and gives an essentially Nietzschean argument that "Justice is nothing other than the will of the stronger". Well, agrees Socrates, the argument is certainly better and achieves a certain level of sophistication more appropriate for a more advanced society.