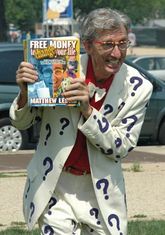 Lesko wants you to get FREE* MONEY!!!!

Matthew Lesko (born 1943), known to many as "that question mark guy," is something like what would have happened if the Riddler had dropped out of villain school and turned to a life of infomercial-driven financial fraud. Lesko has been hawking his books that can show you how to get FREE* MONEY FROM THE GOVERNMENT on the talk show and late-night infomercial circuit since the 1980s. Most Lesko books can be identified by his mug on the cover in addition to the title formula "Free money for x!" The general formula for writing a Lesko book is as follows:

Lesko offers a money-back guarantee on his books, but customers have reported getting a dead line when they call the number for the refund.[2] He also claimed to be a columnist for The New York Times, but in fact had only had a column syndicated by the New York Times Syndicate from 1992-1994. The Times got him to remove this claim from his website. Besides just rolling already available information into brick-sized books, he generally misrepresents how much money you can get by gaming the numbers using programs a normal person wouldn't have access to. For example, he often gives instances of multi-million dollar grants, but "forgets" to mention that it was a grant from an organization like the National Science Foundation for some high-level research project. The New York State Consumer Protection Board has this to say about him:

His main distributor is called Information USA. He also offers "Lesko mentoring services" through his website. No one is sure how a man in a silly question mark suit got people to trust him with their money.

Lesko also claims that he likes to wear his suit "off-duty" as well.[4]

He is also one of the 110 People Who Are Screwing Up America[5].