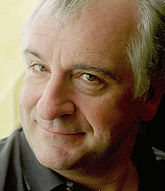 Adams, thinking of better jokes than those in this article

His best known work is the science fiction trilogy of five (or six) books based on the radio series called The Hitchhiker's Guide to the Galaxy (H2G2 or H²G²). This work includes – in no particular order – the books (ISBN 0-330-25864-8)), the television series, the film, the follow up (second) radio series, a comic book, a computer game and, naturally, a towel. It is important that the location of the towel is always known to the owner.

Adams (a well known atheist, referred to in The God Delusion as Richard Dawkins's tallest convert) frequently mocked religion in his works. One example of this is the Babel Fish, which proved God's existence, therefore ironically destroying him in a "poof of logic." This was because, according to a dialogue with God relayed by the narrator, God's existence had been predicated on his followers' unconfirmed faith; the Babel Fish was far too convenient and improbable to be the product of accident or evolution, and therefore had to be the product of a divine hand; his existence thus confirmed, the basis of God's existence was destroyed, and he along with it. Another, slightly less well-known creation, was the Electric Monk. This was a machine capable of believing any weird (often religious) idea which the intelligent owner was unable (or unwilling) to believe in and so had the machine carry it out for him. Adams also developed an amusing demolition of the argument from design, imagining himself in the role of the water in a puddle, and thinking "what a benevolent universe, to have made this hole shaped exactly to fit me!"[note 1]

After he died, "The Salmon of Doubt" was posthumously released containing pieces of unpublished and previously published pieces of work. In one of the 'articles' it reveals that Douglas Adams used to be a believer in Christianity and often attended worship. However, the story tells that Adams was passing a preacher one day at the age of 17 and began to think of how religious education was taught differently than science and maths on a level of logic, making him realise that the preacher was spouting utter nonsense and convincing him of atheism.

In October 2009, NASA's LCROSS spacecraft travelled towards the moon at more than 9,000 kph. On its final approach, the spacecraft tweeted a quote from Adams's The Hitchhiker's Guide to the Galaxy: "And what's this thing coming toward me very fast? So big and flat and round ... it needs a big wide sounding name like 'Ow', 'Ownge', 'Round', 'Ground'! ... That's it! Ground! Ha! I wonder if it'll be friends with me?" And then it crashed into the moon.[1][2]

Towel Day is an annual celebration on 25 May. On that day, fans around the world universe proudly carry a towel in Adams' honour.[3]

Douglas Adams also spawned many Douglas Adams Appreciation Societies (DougSoc, for short) in various universities around the UK. The main aim of these societies was to get exceptionally drunk in the spirit of Adams, rather than dedicate time directly to the author's works although occasionally getting together to watch Hitchhiker's Guide was acceptable once per term. The first DougSoc was formed in Oxford and later in Exeter and York (where DougSoc is still going strong and as drunk as ever). Douglas himself allegedly/definitely[4] referred to the Oxford University chapter of "DougSoc" in conversation/writing[4] as "a bunch of cunts/wankers".[4] In 2008, the University of York society was partially responsible for subverting their local democratic process and electing a pirate (Tom Scott)[5] as Students Union President. Surely Douglas would have approved of that... maybe.