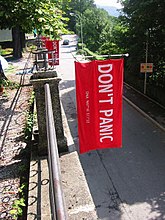 The Guide itself. Warning: its article on Earth is just a stub.

The Hitchhiker's Guide to the Galaxy is a deadly serious history of the universe science fiction comedy series on radio, a trilogy [sic] of five[note 1] books and a short story,[note 2] a set of audio CDs, a best-selling computer game, a stage show, a TV series, and an embarrassingly bad feature film, all created by the author Douglas Adams. The original version of this widely read and hugely influential work was originally broadcast as six-part radio series on BBC Radio 4 in 1978. Since that time, it has existed in a number of different and largely contradictory formats, and has become an international phenomenon. The title The Hitchhiker's Guide to the Galaxy is often abbreviated as HHGTTG, or even H2G2 (or H²G²), as embarrassingly used on fan websites – and sometimes here.

The books in the series are:

It is exceptionally difficult to provide definitive plot summaries for any of Adams' HHGTTG works as the plotline changes in the different versions. The reason for this becomes clear in the final part of the series, in which it is revealed that the plots are all co-existing in multiple realities.

The main reason for this is that each was conceived in its own right, and in order to continue the series into the next phase, Adams tended to ignore endings of the previous version and restart from a similar, but not identical, position in the next. In some cases, most notably the movie but also the game for instance, the plots would be given a rejig to make it fit the appropriate medium. The movie would have to be a self-contained plot that worked for a full 2 hour stint, and so wouldn't be able to follow the exact form of the radio series, book or TV series. As much as the fan dumb may have objected.

The general gist of the story's introductory sequence on Earth is nearly identical in each case, and many themes, set pieces and characters are recurring in all versions.

Arthur Dent, an "ordinary bloke", wakes up one morning to find that his house is about to be demolished to make way for a bypass. His friend Ford Prefect arrives, and takes Arthur to the pub, where Ford reveals that (a) he is not from Guildford, as he had led Arthur to believe, but from a small planet near Betelgeuse (pronounced beetle-juice), and (b) reveals that it is not just Arthur's house, but the whole Earth which is about to be destroyed by a fleet of Vogon Spacecraft, to make way for a new hyperspace bypass. Before Arthur has time to take this in, he finds that he and Ford are on board the Vogon spaceship, having "thumbed" a lift, and that the Earth has been demolished.

At this point, Ford explains that he is a researcher for The Hitch-Hiker's Guide to The Galaxy, an electronic book which allows hitchhikers to travel the galaxy, armed only with their towel and 30 Altairian dollars a day. The book has two main features – firstly that it has supplanted the Encyclopedia Galactica as the repository of all known wisdom, and secondly, that it has the words "Don't Panic" in big letters on the cover. Ford thumbs through a few entries and finds exciting articles such as Eccentrica Galumbitts[note 3] and Zaphod Beeblebrox.[note 4] The entry on Earth reads "Harmless". Ford, who has been researching for the guide, has managed to improve the entry; after trimming by the editor, it now reads "Mostly Harmless".

Ford provides Arthur with a Babel Fish,[note 5] which he puts in his ear. The unfortunate effect of this is to allow Arthur to understand Vogon poetry. Despite heaping praise onto the captain for his poetic talents,[note 6] Arthur and Ford are thrown into deep space, with a negligible chance of being rescued. However, a passing spaceship, the Heart of Gold, which is equipped with the new Infinite Improbability Drive,[note 7] rescues them from certain death at an improbability level of infinite[note 8]. On board, Arthur and Ford meet up with Trillian, Zaphod Beeblebrox[note 9], Marvin [note 10] and Eddie, the ship's computer.[note 11] At this point in the story it is revealed that Zaphod and Ford are semi-cousins sharing six of the same mothers, and that Trillian was a girl who Arthur singularly failed to get off with at a party in Islington, mainly because Zaphod intervened with "Hey doll, is this guy boring you; come with me, I'm from another planet".[note 12] If all that sounds improbable, then it probably is.

As Arthur settles into his new and strangely improbable lifestyle, he decides to have a cup of tea from the Nutrimat,[note 13] which, like Marvin, Eddie and all the doors on the ship were designed by the Sirius Cybernetics Corporation,[note 14] to have GPP.[note 15] Arthur, enraged by the fact that he cannot get a decent cup of tea,[note 16] argues with Eddie, who takes it upon himself to find out precisely why Arthur wants tea. Meanwhile, the ship has settled into orbit around the legendary planet of Magrathea.[note 17] All is fine, save for the fact that two deadly nuclear missiles are heading towards the ship, and Eddie is powerless to do anything, his circuits committed to finding an answer to Arthur's tea problem. At the last second, Arthur pulls the Infinite Improbability Drive lever, and the deadly missiles are turned into a Sperm Whale[note 18] and a Bowl of Petunias.[note 19]

On the surface, the travelers are met by Slartibartfast, who has been awakened from a 5-million-year-old slumber to fill a special order for a new planet. He asks Arthur his name, to which the reply is "Dent – Arthur Dent", and then threatens Arthur that if he does not come with him, he will be late.[note 20]

Douglas Adams' creation has become a cult, and many of the elements of the story have fallen into the language and culture.[1] For example:

Adams was certainly a provocateur when it came to religion (Richard Dawkins describes him as his "tallest convert") and Hitchhikers was no stranger to poking fun at religion. In one notable segment, the Babel Fish is presented as something so unlikely it must be the ultimate evidence of intelligent design and as such is the ultimate disproof of God. It goes a little something like this:[12]

Although cut from the movie version, possibly to avoid offending the religious sensibilities of the US Religious Right, it was available on the DVD extras along with other cut segments.[13] The argument has never been seriously proposed in real life, but it does poke fun at those who try to prove that God exists while simultaneously using the concept of faith to defend their position.

The last message God sends to his creation (in So Long and Thanks for All the Fish) is: "We apologise for the inconvenience."

The Norse God Thor makes several appearances in Adams's books, although reports of his Odinism have been exaggerated.