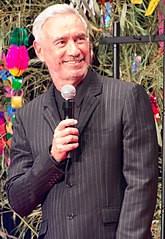 It's karaoke night at the Honolulu Hula Bar.

Roland Emmerich (1955–) is a German writer, director, and film producer, known for making popular, big-budget movies, especially a few that could be best described as "disaster porn."[note 1] Like many other Hollywood products, they exhibit cheerful disregard for scientific and historical accuracy, which wouldn't be much of a problem if a few of them didn't influence popular perceptions with blatant bullshit.[1]

The sci-fi action movie that established the franchise. As you probably already know, Stargate used the idea of ancient astronauts and Ancient Egyptian exoticism as a background. Unlike a certain TV series though, it never pretended to be more than fiction, and didn't choose to linger on AA lore, focusing instead on shoot-outs with aliens masquerading as Egyptian deities, mind controlling parasites, a cute female "romantic interest," heroic sacrifice and, of course, the requisite Victory for the Earthlings.

It would later be adapted into a long-running TV series, Stargate SG-1, that was even less interested in ancient astronauts except to provide inspiration for cool-looking monsters of the week and explain why the aliens the heroes are fighting look like pagan gods. Surprisingly, it was more successful than the movie in the long run, running for ten seasons and producing two spinoffs.[2]

Rather strangely, the film and the TV series produced a conspiracy theory claiming that they were created by the US government as a cover for a similar, real-life program involving alien contact via wormholes and portals. One purported "whistleblower" even called it a "soft disclosure" project.[3] Naturally, when the writers on SG-1 found out, they took the idea and spoofed the living hell out of it, devoting two episodes to an in-universe sci-fi TV series called Wormhole X-Treme! that served just that role.[4]

Alien invasion action/disaster movie with the requisite spectacular destruction of landmarks, including the White House.[5] Uses Area 51 and a government recovery/cover-up of an alien crash at Roswell as parts of the setting, complete with the climax involving a gigantic dogfight over Area 51 and the refurbished Roswell saucer being used by the heroes to save the day. Alien systems are also as vulnerable to Earthling computer viruses as Windows XP with no antivirus software, which they justify by saying that our modern computer technology is derived from what they reverse-engineered from the Roswell saucer. It's also known for its weird mix of flag-waving patriotism, from the Americans saving the day to the fact that it's named after America's biggest national holiday (and was released on that weekend), with a message of global unity as the world comes together to fight the alien baddies, with one critic noting that it helped create the template for the kind of blockbusters with international appeal that now make up Hollywood's bread and butter.[6]. At least it had one of the most epic Presidential speeches in film history [7]

It got a sequel twenty years later, Independence Day: Resurgence, also directed by Emmerich from a script he and Devlin co-wrote (albeit with three other credited writers). Consensus is that you don't need to see it.

The first American adaptation of Toho's legendary King of the Monsters to be put to film. Godzilla follows an asexual male mutated iguana's quest to lay eggs and claim New York as its territory. Its up to a biologist named Nick Totopolus Tatopoulos to stop it alongside the French and American military. Fans of the original character did not like this film because of the drastic change of Godzilla's appearance and backstory. In the Japanese film Godzilla: Final Wars (2004), the 1998 Godzilla, now known as Zilla, attacks Sydney, Australia, before being killed in five seconds by the «real» Godzilla.

See the main article on this topic: The Day After Tomorrow

A disaster movie that committed gross crimes against physics, climatology and meteorology, misleading some people about the effects of global warming. In the movie, it somehow resulted in the almost-instantaneous glaciation of the United States.

An epic adventure movie that played fast and loose with "prehistoric" tropes (read: about as accurate a portrayal of the time period in the title as The Flintstones was). Notable for having the Giza pyramids (or some other pyramids) built with woolly mammoths, apparently some 7500 years early.

Based on the 2012 apocalypse claims, but invented its own fictional disaster mechanism (neutrinos don't work that way[8]). Among other things, it featured a tsunami that reached higher than the peaks of the Himalayas. It would be just another science-challenged Hollywood disaster flick, if the promotional campaign for the movie didn't have the bright idea to capitalize on the existing 2012 craze, urging people to "Google 2012" (a bad idea, as a search returned mostly fringe sites) and creating a website for the fictional "Institute for Human Continuity" that achieved viral status and repeated Planet X and crustal displacement claims.

Roland Emmerich is a Shakespeare truther. He also apparently believes that Tudor Rose was a real flower; that special effects were omnipresent in Shakespearean plays; and that no other playwright knew how to write entirely in iambic pentameter despite the form existing for centuries by the Elizabethan era.

Emmerich can cite his right to meddle with history as much as he wants.[9] But when the fundamental premise of your film is a fringe conspiracy theory you admit you actually support, further admittance to making shit up just demonstrates how stupid your premise is to begin with.

To anyone who gives credence to anti-Stratfordianism, just know there's significantly more evidence Roland Emmerich's a hologram created by Michael Bay than of Edward de Vere being the true author of Shakespeare.

Emmerich is a strong supporter of LGBT rights (he's gay himself), and went to bat casting Will Smith in the lead for Independence Day when the other producers didn't want a black main character.[10]

He's far from a studio shill, and it really seems he does what he does out of a love for filmmaking.[11] But does that absolve him of his sensationalistic crap? Fuck no.