Raging Pencils (known as The Far Left Side until July 17, 2015) is a liberal web comic drawn by Mike Stanfill, an atheist with new episodes available every Monday, Wednesday and Friday.

Stanfill's first works were recaptioning/re-ballooning of episodes of The Far Side by Gary Larson with leftist and liberal messages. Eventually, after sufficient copyright threats, he learned to produce computer-generated artwork and now his works are all original, even if his style isn't.

He spends QUITE a bit of time tearing apart Republican, conservative and religious right talking points. As one might imagine, the GOP primary race for the 2012 U.S. Presidential Election gave him no shortage of inspiration.

In addition to his tri-weekly comic, he also keeps readers up to date on the jobs-creation progress of the Republican-held United States House of Representatives (which invariably details them doing anything else but working on job-creation legislation) as well as a daily plea for readers to call their cable and satellite provider and complain to drop Fox News from their lineup. 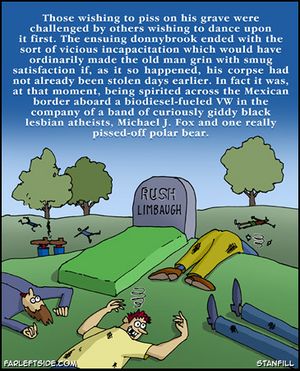 A sample cartoon. Please note the wall of text, demonstrating that Stanfill does not know the difference between a political cartoon and a diatribe.

Sympathetic viewpoints aside, he is generally considered an example of the talentless hackery that so pervades political cartoons. It's almost as laugh-out-loud unfunny as Mallard Fillmore.

Stanfill is also a 9/11 truther with a permanent priapism over the demise of WTC Building 7.