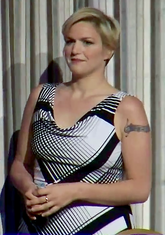 SciBabe holds three degrees, one in Theater, a Bachelor's of Science in Chemistry and a Master's in Forensic Science (focused on biological criminalistics).[2][3][4]

Before becoming a science communicator on the internet, Guinevere worked in testing labs for Monsanto. This has, of course, led to many of her detractors accusing her of being a shill for them.

SciBabe exploded onto the scene with an article on Food Babe. In it SciBabe debunks major talking points about Food's appendicitis, her abuse of the word toxic, organic foodstuffs and how the preying on fear is her weapon. The topic of banning over supposed shilling, racism or sexism is brought up while also mentioning that Food Babe only seems to be okay with supposedly bad ingredients such as aluminum and agave nectar when they come from her, in products she sells at ridiculous markups.

Most importantly SciBabe talks about food allergies and how lying about them at Food Babe's request is causing severe damage to people who actually have food allergies, like SciBabe herself. Unlike most people who espouse a gluten-free diet, SciBabe is one of the few people who actually has to adhere to it due to having celiac disease. As the prevalence of these fake allergies rises, their effects can be detrimental to people with the actual disease. If, for example, so many fakes come in to a restaurant and order with a "hold the gluten", some businesses might flat-out ignore this and then persons with celiac who order the same thing might suffer severe complications. [1]