The Freedom From Atheism Foundation (FFAF) is an anti-atheist propaganda website whose stated aim is to "raise awareness of militant atheism and atheist atrocities around the world"[1][note 1] Unlike the Freedom From Religion Foundation, the FFAF serves no actual benefit or purpose, because rather than actually promoting religious belief, it instead appears to be hellbent on demonizing and blaming everything on DA AYTEEIIIIIIZTZ, and its only purpose other than that seems to be as just a platform for far-right wingnuts to indulge in their confirmation bias that anyone who does not believe in God is Stalin.

A favorite obsession of the Freedom From Atheism Foundation's is to constantly, consistently propagate the classic conservative Christian lie that communism and atheism are interchangeable — all this despite the fact that there have been some communist nations that have a Christian majority, e.g. Cuba. This is shown by their constant substitution of the word "communism" with "militant atheism" (an imaginary threat that the FFAF loves to imagine is persecuting them whenever just about any atheist dares to say that they don't believe in God within earshot of a religious person who has grown accustomed to their beliefs never being challenged). 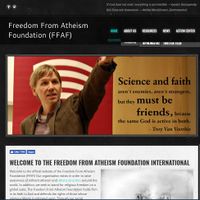 Because you need to be free from freethought! And also, has anyone else noticed how the man in the picture looks like he's heil-hailing Hitler?

Like many other anti-atheist sites, the FFAF also appears to believe that the "New Atheism movement" is also "militant" for daring to oppose the popular idea that religion is some special, unattackable sacred-cow that must be unconditionally respected by everyone, and also for daring to suggest that religion is bad, because you know, personally disliking religion is the same as hating all religious people.[2] Additionally, they also seem to really enjoy trolling irreligious people- guess how? By accusing them of trolling![3] The irony meter is strong with this one... 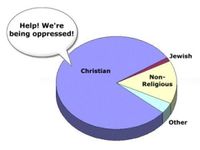 Quite unsurprisingly, the FFAF really, really does not like anyone who does not share their particular religion, and their persecution complex appears to be so extreme, that they think that someone even vaguely disagreeing with them is trying to oppress them (of course, without any proof whatsoever). To justify this, they frequently post things on their Facebook page that take advantage of real Christian persecution, using it as an excuse to demonize all non-Christians, thus reinforcing its fanboys' "Us Versus Them" mentality.[5]

See the main article on this topic: War on Christmas

Like many far-right Christian sites, the Freedom From Atheism Foundation is convinced that there is a war on Christmas. One of their FB posts on the topic reads:

As you can see, this post is a complete non sequitur as it says that certain stores are secular (which is apparently a Very Bad Thing), but then simultaneously says that there is a site that shows you stores that are allegedly not. The existence of stores that are religion-neutral is not censorship if other options are available and/or are allowed to exist. Now FFAF, you are in full control of where you choose to shop.

The site loves to cherry-pick convenient examples of atheists either becoming religious or doing horrible things, e.g. raping/harassing women, and then trying to pin it on the entire atheist community.[7]

This webshite website is so biased and full of hate that many would consider it to be a "hate group", as it frequently uses lies, generalizations, and intentional misrepresentations to defame atheists — but then of course, if they do all of that, then they are totally not a hate group, you intolerant, militant atheist. In fact, the FFAF even claims to "love" the very people whom they work so hard to dehumanize.[8] In a brilliant display of deliberate dishonesty, the Freedom From Atheism Foundation also falsely claimed that they were "endorsed" by PZ Myers, despite the fact that he openly stated in his blogpost that he does not at all agree with them, criticizes their claim that "atheism is a religion", and states that their goal is "all about restricting religious freedom."[9]

The Freedom From Atheism Foundation seems to be to the Freedom From Religion Foundation what Conservapedia is to Wikipedia, what GodTube is to YouTube, and what MyChurch is to MySpace — its very existence is driven by fear and anger at the realization that the church no longer dominates every aspect of Western culture and that reality is not in their favor, so these people create right-wing Christian ripoffs of virtually everything so that they can make up their own rules, cry persecution, and censor anyone who does not toe their side of the religion line.[10]

However, it can be really useful to you if you are a religious person who is fed up with "intolerant" atheists doing the following things:[11]

See the main article on this topic: Red Pill Religion

Some of the posts on a page of the anti-atheist and antifeminist blog site Red Pill Religion (RPR) suggest that the two organizations are quite close; RPR has a post praising FFAF.[12]