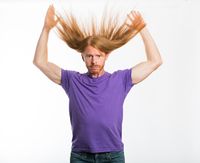 Jonathan P Sears aka “Spiritual as f*ck” JP Sears (1981–) is a YouTube comedian and "emotional healing" coach known for parodying new age hippies while also appearing to peddle pseudoscience, including veiled attacks on vaccines and the American Heart Association, which kind of defeats the point of his parodies.[2][3] He has downplayed the risks of coronavirus and quite well known for Coronavirus denialism. He first gained popularity for his rather unfunny satirical parodies of the wellness industry in a series called ‘Ultra Spiritual Life’ on his YouTube channel, AwakenWithJP. He's made videos full of conspiracy theories and anti-vaccination talking points.[4] JP Sears often has libertarian themes railing against political correctness[5][6], social justice warriors[7] and people getting triggered[8] dedicating a video to why he dislikes them. He is an advocate of capitalism being an MC of the 2018 Capitalism Conference and regularly appears on The One Percent Podcast hosted by Ryan Moran (whose Strives to be like David Koch).[9] Sears says in a clip on “One Percenters” about personal responsibility that millonaries are “just regular people” and that after Covid19 "some people say it’s a depression, I say “Fuck that! It’s a time of opportunity.”[10]

He's downplayed the risks of Coronavirus and floated it as a conspiracy to sell vaccines by Big Pharma. On 7 February 2020, Sears said the stress from media was worse than getting Covid-19, saying “In America you get nothing but click bait headlines about the Coronavirus that inflict fear and stress onto you that, which is questionably worse for your health than if you were infected with the virus."[11] He repeated the theme again a month later in another video[12] called 'Coronavirus — It's Deadlier Than You Thought' published on 11 March 2020 where Sears downplays the risk of the coronavirus saying:[12]

"We're hoping and praying that a drug company company coincidentally comes out with a vaccine that's somehow magically created with long-term studies to show its safety and effectiveness against the coronavirus within the next few months. Such a vaccine will be rapidly sold to hundreds of millions of people around the world and would also make the panic and sensationalism by the news outlets look like they were in the most deceptive yet elaborate marketing schemes the world has ever known even though that's definitely not going to be the case given that the news is honest a hundred percent of the time and doesn't have a vested interest in spreading fear like a virus to boost its ratings and ad revenue. Is is safe to say that the news is being honest this time as well? Yes it is now, considering that the coronavirus symptoms are very similar to flu symptoms and the fact that the coronavirus has infected a little more than 500 people resulting in 22 deaths, flu has infected 32 million people resulting in 18,000 deaths, is it wise to have a thousand times more panic? Indeed it is…”

Yes, yes it is wise. There's now over a million cases in the US and over sixty thousand deaths.[13][14] If you think the massive rises in deaths would make him think again - you'd be wrong. In a recent video, May 6, which marks a decline in humour, titled ‘What It's Like to Believe Everything the Media Tells You’ he mixes anti-vaxx arguments with conspiracies about being micro chipped, Bill Gates, the World Health Organisation along with downplaying the risks of Coronavirus - a smorgasbord, if you will, of some his worst takes.[15] In the video he likens "mandatory vaccines" to rape, saying that "the best medicine is like the best sex, non consensual, they work on the same premise." He acknowledged the misinformation by saying on his instagram that, "I’ve got a new video that I can’t release on IG [instagram] or FB [facebook] because of the censoring that’s happening, my accounts would be in too much jeopardy. So I’m only releasing it on YouTube. "[16] He did it in front of a blue and red pill. He said in a follow up video that the intention was not satire but “The message I spoke is giving a lot of people to voice their perspective…The purpose of the video…is I want to voice my voice I want to represent my truth” and that “I’m a red pill person.”[17]

On 22 March 2020, he encouraged his Instagram followers to take the Corona Challenge by drinking Corona beer and posting a picture with the hashtag #CoronaChallenge accompanied by a video that downplayed Corona virus risks.[18]

A common theme is that media sensationalism whips up fear to sell vaccines, in 2017 he published a video saying "I want to be heavily vaccinated so I can be protected from the diseases that I’ve been told to be extremely afraid of." [19] Which he has repeated in 2020 for coronavirus. He recently pushed a WHO conspiracy on his Instagram [20] along with a photo of a news headline 'No evidence’ antibodies protect recovered coronavirus patients, WHO says'[21]with a photo of WHO Director General Tedros Adhanom Ghebreyesus he wrote:

FACT: I'm an absolute idiot. I love being this way. But my friend @dave.asprey is very intelligent. If you like to function with freedom beyond that of sheep, his thoughts below are worth a read. 👁 Here’s @dave.asprey When you selectively ignore evidence you don’t like, it doesn’t mean there isn’t any evidence. It means you’re blind. Why do any of us listen to the WHO leaders when they are so clearly owned by Big Pharma? The hard working front line WHO doctors are not the problem here. We are supposed to trust the WHO to be logical and impartial. They have lost my trust now that they are just another industry trade lobby. .#pandemic #coronavirus #who ...(thanks @nypost for the headline)

In April 2019, Sears posted a video about vaccines with the by-line “Are you pro vaccine or an anti-vaxxer? Either way, I set the record straight on vaccines.” In the video Sears peddles the false conspiracy theory that Bill Gates didn’t vaccinate his children and that he’s “spent billions funding the mandatory vaccination movement. No one’s been more offensive to anti-vaxxers than Bill Gates…he spearheads the pro-vaxx movement” and that Gates is hypocrite [22] The argument itself is a straw man logical fallacy because the validity of vaccines is based on mountains of peer reviewed evidence, also if Sears had the minimum intellect required to do the most minimum fact checking (doing so would mean he’d have no argument) he’d have found it was false[23] retracted by Your News Wire/Newspunch in 2018, the editor saying "we no longer stand by the statements made in the article" and shown to be false by Reuters.[24] A few weeks after Sears’s video was posted Melinda Gates confirmed on facebook that their children are vaccinated, saying "All three of my children are fully vaccinated. Vaccines work. And when fewer people decide to get them, we all become more vulnerable to disease."[25] Sadly, the meme is still spreading through the sewers of the anti-vaccinaciton movement and still be refuted[note 1][26] helped along by the likes of Sears who still hasn't retracted his video that is on his youtube[27], facebook[28] and instagram.[29]

In 2020 Sears mocks the anti-Bill Gates sentiment in the new age community by satirising a new age person, saying “Bill Gates is the anti-christ,” but Sears himself has pushed misinformation about Bill Gates.[30] This shows how Sears plays all sides.

Sears is an expert at playing both sides regarding vaccines and performs false balance[note 2]. On May 2, 2019 on 'The Wellness Mama' podcast Sears uses the frame of people's intentions to sidestep having to evaluate decisions based on evidence.[31] The conclusion is that both anti-vaxxers and people-pro evidence/pro-health are both right because they have good intentions, they both want "you and your family to be happy, healthy, and free of disease". This is problematic because it side-steps the truth. One might want to you to be "happy, healthy" but what what offer could promote death and disease.

the disagreement comes in is in these such insignificant realms, which is how to achieve happiness and health for our family.... And I think when we focus on the disagreement of how, we're starting to get into what Tony Robbins would call the tyranny of the how.....So I would ask the audience, “Hey, who is for vaccination? Raise your hand.” And, you know, usually at least half the audience, maybe three quarters of the audience, raises their hands and you could already start to feel the turmoil and the room the tension like, “Oh, I brought up vaccinations.” Then I asked, “Okay, who is against vaccination?” And typically it’s about a quarter of the people in the room. And I just go through this whole routine to come to the conclusion and help people realize the reason why you are for vaccines is you want your family to be happy and healthy and free of disease. And the reason why you are against vaccination is you want you and your family to be happy, healthy, and free of disease. The disagreement is on how to get to happiness and health. But I think there’s the, you know…and it was fun to do this with the audiences because I’d see a lot of like, “Oh yeah, that makes sense, JP.”

This is not something to boast about, it's a thought-terminating cliché and relativist fallacy. It's false balance, intellectually weak, dishonest and just plain dangerous.

Sears has been a wellness coach for over 18 years completing a Holistic Coach Advanced Practitioner through the Holistic Coaching Institute/Journeys of Wisdom[32] in Columbus a place founded by John A. McMullin that teaches life coaching and also things like 'bionetic homeopathics'.[33] He started doing YouTube comedy videos much later than his coaching in 2013.[34] He was a faculty member of the C.H.E.K Institute from 2006 to 2013 founded by Paul Chek is himself an anti-vaxxer and promoter of pseudoscience.[35][36]

Sears has promoted Hapbee, a woo wearable device that claims to regulate the users emotions through electro-magnetic waves.[37][38][39][40]