A mirage is an optical phenomenon where light rays are refracted differently by different layers of air producing an illusion. The canonical example is of what appears to be a pool of water in the desert but is actually blue light from the sky refracted to appear below the horizon; this is an example of an inferior mirage, where an object appears lower than it actually is. There are many other forms and related phenomena, such as a superior mirage where a distant object appears higher than it is; a fata morgana, a compound mirage which produces a complex, fast-changing patterns of layers; and the more mundane heat haze where objects appear to shimmer due to movements in air with differing refractive indexes. Astronomical objects are subject to mirages especially around sunrise and sunset, where they can appear higher or lower than they are, or appear deformed.[1][2] There are also other deceptive optical phenomena involving refraction in ice or water, reflection, and shadows, which are also described below.

Mirages are often mistaken for other things. As well as causing inaccurate judgments in very hot and cold places, they may also be to blame for some UFO sightings.[3][4]

Desert mirages are one of the most famous types, depicted in many films. What happens is an image of the blue sky is refracted downwards onto the land and looks like a pool of water. If you're stumbling through a hot sandy desert looking for water, this seems pretty attractive.[5] 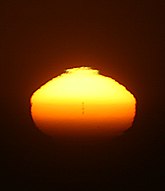 Mirage of the sun with sunspots

In the "omega sun" phenomenon, the sun is refracted so its bottom is widened and it looks like a Greek letter omega (Ω). Other exotically-named solar mirages include the Etruscan vase (where the sun appears to have a stem and widened base), the Novaya Zemlya (in which the sun is severely distorted into hourglass shapes), the green flash (a brief flash of green light around dusk or dawn due to different colored light being refracted different amounts), and many more.[2][6][7]

These don't meet the strict definition of mirage but are other optical phenomena that deceive people into believing that they're the chosen race, visited by UFOs, or are being pursued by giant ape-men.

Various phenomena involve a rising or setting sun. In a sundog (or sun dog, or parhelion), two fainter bright spots appear, one either side of the low sun. It is actually caused by refractions in ice crystals rather than in different layers of air.[8][9] Light pillars are also caused by ice crystals and a low sun, but are vertical lines.[10] A Lowitz arc is a curved shape extending inward from a sundog.[11]

There are also various types of "halo" (circles or arcs) around the sun caused by refraction. In a parhelic circle, refracted light forms a horizontal circle or arc passing through the rising or setting sun.[12] A 22° halo and a 46° halo are circles sometimes seen around the sun or moon, at an angle of 22 degrees and 46 degrees respectively from the sun at their centres.[13][14]

This phenomenon looks like a huge dark figure silhouetted against the sky, but is caused by a person's shadow cast by the low sun onto low cloud. It is named after a mountain in the German Harz range, where it is common owing to almost invariably misty or cloudy conditions, but it may also be an explanation for some sightings of the Yeti, Bigfoot, and hill monsters in Scotland (the Big Grey Man of Ben Macdui).[15][16]

See the main article on this topic: Rainbow

Produced by refraction in raindrops, the rainbow shows God's love for all LGBTQI+ people.

Like a little rainbow, a glory is a spot of light with colored fringes, occurring at the antisolar point, i.e. opposite the sun. It is produced by light refracted by raindrops or mist droplets.[17]

Heiligenschein (or "holy light") is a sort of combination of glory and Brocken spectre: a halo of light around a shadow on the ground. It is caused by dew scattering light back at the viewer.[18]

Kenneth Arnold's 1947 sighting of nine flying saucers, near Mount Rainier in the Cascades mountain range in Washington state, is one of many sightings attributed to mirages. It has been suggested by the US Army Air Corps and later by skeptical researcher Steuart Campbell that what Arnold saw could have been refracted images of snow-topped peaks in the Cascades.[19][20]