Robert France is a ufologist who, according to some people, is an alien, or possibly just possessed by one. France's partner Shelagh Yeoman has also claimed that France is guided by the spirit of a Native American shaman named Red Eagle, who has given him miraculous healing powers.[1]

Shelagh Yeoman has said that in 1991 she saw his head temporarily morph into that of a large-eyed, pointy-nosed alien shortly after he kissed her.[2] "Did a human called Robert France previously exist?", ponders ufologist David Moncur. "Was he murdered somehow, then an alien exploit in technological ability used to generate an illusion that that familiar human image is still there to kiss you goodnight?"[3]

France, Yeoman and a third ufologist, Clive Potter (described by Yeoman as "a man with many years of experience with these people who are ‘aliens’ and ‘Christs’"[1]), teamed up to form an organisation called Pendragon. This outfit is notable largely for collaborating with the rock band C.E.IV to release an audio tape called The Shadow of Man in 1992; Pendragon broke up shortly after this project. C.E.IV member Brian McMullan has expressed a belief that France was "possessed by a formidable unknown entity".[4][5] [6] 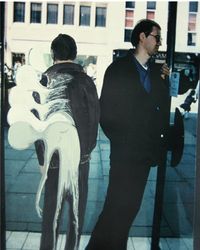 McMullan claims to have seen France turn into a grey alien in the doorway to a shop, as Clive Potter relates:

It was at this point, to Brian’s utter amazement, he saw Robert’s body, from the waist up, bend sharply over to the left in a series of five jerking steps until it was parallel with the ground... the lower half of Robert’s body remained normal, but as the upper body hit the parallel, it was as though it was suddenly sucked back, swiftly to an upright position in one swift move. It didn’t ‘ratchet’ like the original moves. As the grey torso settled back onto the waist and legs, Brian noticed that the lower half had now changed to match the grey alien form

The now complete transformation was, by Brian’s judgement, about four feet 10, something like that.[2]