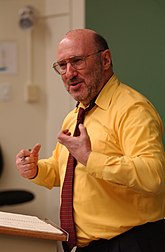 Walter Edward Block (1941–) is an American Austrian School economist, anarcho-capitalist theorist, supporter of "praxeology" pseudoscience and a nutcase. According to the chairman and former Ludwig von Mises Institute president Lew Rockwell, he holds the dubious "honor" of being the true owner of the fringe tradition of libertarianism created by Murray Rothbard.[1] Indeed, Dr. Block considers himself even more of a libertarian than Rothbard, who, according to himself was only about 97% libertarian, similar to what he thinks of Rand Paul.[2]

Mr. Block has written a pantagruelic number of articles, books and papers, the most famous being his 1976 book Defending the Undefendable,[3] often regarded as a classic among wingnut libertarians. With a commentary by the Nobel Prize winner Friedrich Hayek, (whom Block however considers a "socialist"), the book presents "pimps, drug dealers, blackmailers, corrupt cops, and loan sharks as economic heroes."[4] [5] After finishing the book, a sane person will undoubtedly conclude that not only has Block failed to defend most of these groups, but that he is probably a barely functional psychopath.

The consensus among mainstream economists is that free market enterprise with some regulation is the best way to allocate resources and achieve prosperity. [6] Walter Block, however, disagrees with most of these views, and labels these economists "socialists" (for considering any regulation ever justified) or "positivists" (for using the scientific method). Indeed, Block has gone so far as to accuse Milton Friedman of being a socialist - which, by Block's bizarro Manichaean standards, is pretty accurate.[7] Block advocates for many ideas considered to be outdated by virtually all economists, even those on the far right. Those failed ideas include the gold standard, full-reserve banking, praxeology and Austrian Business Cycle Theory among others. He also thinks that deflation is a good thing and that there's no such a thing as natural monopolies (defending the privatization of every road, and even the oceans). The fact that an ardent promoter of so many fringe ideas can have such an impressive seeming curriculum vitae (Ph.D. in economics from Columbia University, distinguished chair at Loyola University New Orleans) just might be evidence that Block is at least partially correct regarding one of his points, namely his criticism of academia.

Walter Block manages to be even more disgustingly deranged outside the field of economics. Among other bad ideas, Block thinks that a free society should permit "volunteer slavery".[8] For Block freedom means freedom of choice - especially the absolute freedom to engage in market exchange. Since all people are initially endowed with ownership over their own bodies, they should be free to sell that private property to another to do with as they wish. So selling oneself into slavery can be an expression of freedom. Despite the fact that Jeffrey Epstein found this to be a congenial view, most libertarians regard this as a bridge (built by slaves) too far. Yet contradicting his professed beliefs about freedom of choice, Block joked that involuntary slavery in the US was not so bad:[9]

Block has also flirted with race realism at least once: during a lecture, when asked by an attendee to explain the difference in productivity between blacks and whites, he stated that as an economist he was not qualified to explain the disparity but he did offer two thoughts that according to him, might account for the disparity: first, what he called the "politically correct" explanation, or socioeconomic disparities and historical injustices towards blacks; second, a "political incorrect" explanation, or "lower black IQs", using The Bell Curve as "evidence". [10]

Among other stranger opinions, Block also thinks that Civil servants (except for his friends like Ron Paul and Hans-Hermann Hoppe) should be punished for their crimes against humanity in a huge Nuremberg-like trial.[11] That wouldn't however be an example of ex post facto, since by his reasoning the law of the state is illegitimate and the only law that exist is the natural law of private property. This is made stranger by his belief that private courts should resolve all disputes and that if we can't determine which courts are legitimate "then its war".[12]

Perhaps his most famous idea in the field of what was supposed to be "ethics" is "evictionism", a proposed form of abortion based on property rights. Simply put, the idea is that abortions are cool as long as the life of the baby is not in danger. Giving how much he's a horrible person, that can actually be a sound idea.

Taking property rights to the limit[edit]

If all this isn't enough to prove Block's general nuttiness, we leave you with this quote from the man himself.[13]