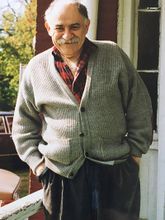 Murray Bookchin in Burlington, VT in 1990

Murray Bookchin (January 14, 1921–July 30, 2006) was an American social theorist, author, orator, historian, and political philosopher. A pioneer of social ecology, Bookchin greatly influenced modern day anarchist, libertarian socialist, and ecological thought. He was the author of two dozen books covering topics in politics, philosophy, history, urban affairs, and ecology. Among the most important were Our Synthetic Environment (1962), Post-Scarcity Anarchism (1971), The Ecology of Freedom (1982) and Urbanization Without Cities (1987).[1]

Despite being known for his contribution to anarchism, he broke with the label and pursued his own philosophy known as Communalism in the late 1990s.[2]

Bookchin's work had a huge influence on the thought of Kurdish rebel Abdullah Öcalan. Öcalan founded the Kurdish Workers' Party (PKK) in Turkey under rigid Marxist-Leninist lines in the 1980s, but broke off into libertarian anarchism in 1999 after reading Bookchin's work in prison. Drawing heavily on Bookchin's libertarian socialist idea of communalism, Öcalan fashioned his ideal society of "democratic confederalism"[3] which ultimately underpinned the political outlook of the Autonomous Administration of North and East Syria (NES), more commonly known as Rojava.

Bookchin felt that our environmental predicament is the result of the cancerous logic of capitalism, a system aimed at maximising profit instead of enriching human lives. As he claimed in The Next Revolution, 'by the very logic of its grow-or-die imperative, capitalism may well be producing ecological crises that gravely imperil the integrity of life on this planet.'[4] Bookchin believed that his theory of Communalism offered a solution to humankind's need for 'a constant awareness that a given society's irrationality is deep seated, that its serious pathologies are not isolated problems that can be cured piecemeal but must be solved by sweeping changes in the often hidden sources of crisis and suffering—that awareness alone is what can hold a movement together, give it continuity, preserve its message and organization beyond a given generation, and expand its ability to deal with new issues and developments.'[4]

Bookchin created a theory he called Communalism: a directly democratic political organization anchored in loosely confederated popular assemblies, decentralization of power, absence of domination of any kind, and replacing capitalism with human-centered forms of production.[4]

Bookchin sought throughout his life to dispel the myth that revolutions (especially the French Revolution) 'are made by tightly disciplined cadres, guided by a highly centralized leadership' [5]. He wrote in response to an attack on anarchism by Huey Newton that:

All the great social revolutions are the work of deep-seated historic forces and contradictions to which the revolutionary and his organization contributes very little and, in most cases, completely misjudges [5]

'Alas, the barbarians are already here — and the ‘Roman holiday’ in today’s American cities flourishes on crack, thuggery, insensitivity, stupidity, primitivism, anticivilizationism, antirationalism, and a sizable dose of ‘anarchy’ conceived as chaos. Lifestyle anarchism must be seen in the present social context not only of demoralized black ghettoes and reactionary white suburbs but even of Indian reservations, those ostensible centers of ‘primality,’ in which gangs of Indian youths now shoot at one another, drug dealing is rampant, and ‘gang graffiti greets visitors even at the sacred Window Rock monument,’ as Seth Mydans reports in The New York Times (March 3, 1995).' Yikes.

Bookchin occasionally wrote under the pseudonym Lewis Herber, most notably for an article titled Ecology and Revolutionary Thought for the British monthly Anarchy in 1965.[6]