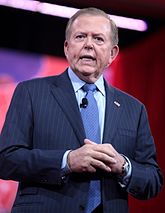 Lou Dobbs (September 24, 1945–) is a former CNN anchor. He graduated with a degree in economics from Harvard University in 1967, joined CNN in its infancy, and quickly climbed its ranks. Dobbs first started receiving negative scrutiny in the early 2000s by calling the War on Terror a "war against Islamists," although he doesn't talk much about that issue anymore. His staunchly anti-immigration stance has provoked protest by the Hispanic community; despite these views, Dobbs hired illegal immigrants to take care of his daughter's horses. Dobbs is also something of a conspiracy theorist who made birther noises — first on CNN, for which he was fired, and then on his radio show.

He was the host of Lou Dobbs Tonight on Fox Business Network and is one of Donald Trump's most prominent fanboys. Likewise, Dobbs is one of Trump's "favorite media toadies".[1] In 2020, Dobbs stated that Trump's former-National Security Advisor/war hawk/neoconservative John Bolton had "been reduced to a tool for the radical Dems" because Bolton dared to insinuate that Trump had violated the Constitution.[2] Fox finally got fed up with his support of election conspiracy theories and other Trumpian bullshit, and canceled his show on 5 February 2021.[3]

This media-related article is a stub.
You can help RationalWiki by expanding it.
Retrieved from "https://rationalwiki.org/w/index.php?title=Lou_Dobbs&oldid=2283628"
Categories:
Hidden categories: