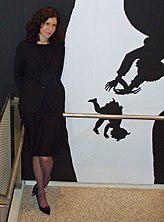 Megan McArdle (also known as McMegan) is a self described libertarian[3] "econoblogger" who is now a columnist for the Washington Post. She is best known for her dismal argumentation style and being of above-average height.[4]

McArdle started writing in 2001 under the nom de plume Jane Galt. She gained a reputation for her Objectivist reason and rationality claptrap. For example, in 2003 she made waves for her novel idea to curb violence during the anti-war protests:

That same year, she wrote a number of posts attacking Iraq War critics. Showing a true gift for prescience, she predicted that the war would cost well under a trillion dollars over the long run; casualties would be no more than a few hundred per side; that the war would bolster the economy and make oil prices drop; and that there would be no impact on the credibility of the United States government.[6] See Thomas Friedman.

With such insights, it came as a surprise when she started writing for The Economist in 2003; some might say that it's a bit odd that a magazine would make an "Economics Correspondent" out of someone who has no background in economics, but what those critics fail to take into account is that McArdle is very tall.[7]

In 2007, McArdle managed to land a spot on the website of The Atlantic Monthly. The Atlantic has a long history in American politics, having published "The Battle Hymn of the Republic," original works by Mark Twain and Martin Luther King, Jr.'s "Letter from a Birmingham Jail." McArdle — clearly realizing the gravity of her new position — changed to a more sedate writing style, focusing on more serious topics like:

This is not to say that she never tackled actual economics issues; however, when discussing economics, her knowledge really shined through... well, as in inventing statistics to support her theses.[14] She left the magazine in 2012.

As her history suggests, McArdle was a supporter of the Iraq War during both the run-up and the occupation. Since 2007, her remarks on the war have been scarce and mostly focused on casualty estimates. She has written a multi-part criticism of the Iraqi Body Count[15] and attempted to refute the 2007 Lancet study using a bizarre "macaroni and cheese" analogy.[16]

In 2008, McArdle finally broke down and wrote some very mild mea culpa posts. However, she was never able to fully admit any error, even having the audacity to claim that we should listen to the pro-war crowd in the future because they learned from their mistakes.[17]

Megan McArdle thinks that during a school shooting like the Sandy Hook massacre, "the correct thing to do is for everyone to instantly run at the guy with the gun." Supposedly, this would reduce the body count, when really it would just increase the chances of one person getting close enough to attempt to disarm the shooter while said person's friends were killed.[18]