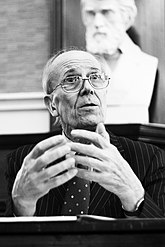 Norman Tebbit (29 March 1931–) is a British former Conservative politician. He was known as 'The Chingford Skinhead' (from one of the constituencies he represented), and he was represented as such on the satirical television puppet show Spitting Image.[1]

Tebbit was a staunch supporter of Margaret Thatcher and promoter of right-wing (UK flavour) views. The sometime pilot once advised the jobless to 'get on a bike' and find work. Why bikes?[2]

Tebbit is occasionally in the news for expressing bizarre views on immigration. According to him, immigrants are insufficiently integrated if they support the cricket team of their country of origin (does he not know you never, ever change your sports team?). An even weirder proposition is that immigrants should be asked to state which side their ancestors were on in the Second World War.[3] So, presumably, Ukrainian vegetable pickers are A-OK, but German investment bankers can sod off, in his view. And people from Italy, which switched sides in 1943, would have to stay outside the UK for the first half of their contract.

Unsurprisingly, Norm is not much of a fan of LGBT rights. In response to the British Government's Civil Partnership Act he warned it might mean a lesbian queen could give birth to a future monarch by artificial insemination and said that the legislation could allow him to marry his own son to escape inheritance tax. Yes, really, he did say that.[4]

This politicians-related article is a stub.
You can help RationalWiki by expanding it.
Retrieved from "https://rationalwiki.org/w/index.php?title=Norman_Tebbit&oldid=2491073"
Categories:
Hidden categories: