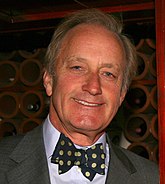 Neil Hamilton is a being of pure evil wrapped up in a mask of adorable incompetence. His inconsequential career as a Conservative MP came to an end when he took a bribe from notorious conspiracy theorist and dodgy businessman Mohamed Al-Fayed.

Hamilton subsequently pursued a low-level media career, proving that the British love anybody no matter how evil as long as they are self-deprecating with it. Although Hamilton's one skill is in choosing his enemies: Al-Fayed and disgraced PR man Max Clifford are two of the few inhabitants of western Europe more loathsome than him.

You can't keep a bad man down, and Hamilton returned to politics with United Kingdom Independence Party (UKIP) in 2016, being elected a member of the Welsh assembly (he was born and raised in Wales). His wife Christine has proved a lasting companion and frequently appears with him in the media. As with his mining-engineer father, there is no depth to which he will not sink.

For what toffish nonsense Neil got up to while he was at the University of Cambridge, see: the Eldon League

. Not quite the Bullingdon Club

Hamilton was MP for Tatton in Cheshire, which later gave the world the even more evil George Osborne, Chancellor of the Exchequer from 2010–2017, who was then replaced by the equally (if not more) contemptible Esther McVey

. As an MP Hamilton's chief action of note was to argue in favour of lead as an additive in petrol/gasoline, pooh-poohing the risks of brain damage from lead poisoning. He also lobbied for Big Tobacco, working for Ian Greer Associates on behalf of US Tobacco.[2]

He was involved in the Western Goals Institute, a very right-wing anti-communist and anti-black-person group which distinguished itself by measures such as bringing a lawsuit against Oxfam, War on Want and Christian Aid when they spoke out against apartheid, and more generally campaigning for the preservation of apartheid and against multiculturalism. The WGI was generously described by a senior figure in the Board of British Jewish Deputies as "not fascists or anti-Semitic, but they inhabit the shadowy, nether-world of the far right-wing".[3] But Hamilton probably didn't do much personally.

In 1994, the Guardian published a story saying he had received a bribe from Mohamed Al-Fayed in exchange for asking a question in the House of Commons. Hamilton sued the Guardian for libel, puffed out his chest a lot, then caved in immediately before the trial, in September 1996. The Guardian celebrated with the headline "A Liar and a Cheat".[2]

Despite this, Hamilton refused to stand down as an MP. BBC war correspondent Martin Bell stood against him in Tatton as an independent anti-corruption candidate and won the seat with a majority of over 11,000. Previously Tatton had been the fourth-safest Tory seat in the UK.[4]

After his election defeat he swiftly became a figure of fun on television, appearing on popular satirical show Have I Got News For You one week after the vote. He proved himself willing to laugh at his reputation for corruption. This sense of humour wasn't totally a new thing: he had won the Spectator magazine's parliamentary wit of the year award in 1989. One of his many hilarious jokes was to suggest to Jeremy Corbyn that he have the IRA shoot old age pensioners.[5]

He also dabbled in the great British artform of pantomime, playing Baron Hardup in Cinderella opposite his wife's Fairy Godmother.[4]

In 2001 he was falsely accused of rape; his accuser was sentenced to 3 years in jail for perverting the course of justice, and her PR man Max Clifford paid Hamilton compensation. In an unrelated case, Clifford was sentenced to 8 years' imprisonment for multiple sexual assaults on teenage girls.[6] Hamilton obviously wasn't quite that bad.

In 2011 he was elected to the National Executive Committee of UKIP. He later served as deputy chairman and briefly campaign director despite being derided for his amateurism by certain party figures.[4] In May 2016, he was elected to the National Assembly for Wales as a list MP (through proportional representation). He was then voted as leader of UKIP's representatives in the Welsh Assembly. Because they like a laugh. Then two years later he was ousted.[7] In 2020 he became UKIP's leader. In the May 2021 election, Hamilton - along with every other UKIP member - lost his seat in the Welsh assembly.