Unite Against Fascism is a British organization whose stated purpose is to call for people to, well, unite against fascism. They are often seen opposing demonstrations by the British National Party and the English Defence League.

It was founded in 2004 as a result of a merger between the Anti-Nazi League and the National Assembly Against Racism.[1] Its joint secretaries are Weyman Bennett and Sabby Dhalu,[2] while Islamic fundamentalist Azad Ali is vice chair.[3] Unite Against Fascism also counts among its brass a number of members of a communist group, the Socialist Workers Party. 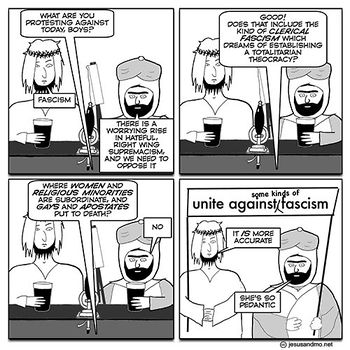 There have been some concerns that the SWP is undermining the anti-fascist movement by trying to make Unite Against Fascism into an SWP front (as they try with pretty much any organisation they come near);[4] of particular note was the parting of UAF with the anti-fascist magazine Searchlight in 2005. Searchlight alleged that UAF had been trying to tar them as "Zionists;"[5] a key plank in the SWP platform is anti-Zionism.

One Law for All, an organisation opposing both Islamism and far-right groups such as the BNP, criticised UAF for joining a pro-Sharia protest alongside Muslims Against Crusades; a UAF spokesperson tried to justify this action as "solidarity with groups who are faced with persecution by fascists". "It is this sort of warped logic that puts ‘progressive’ groups in bed with fascists – albeit the Islamic kind", replied One Law for All spokesperson Maryam Namazie. "Basically this logic sees people as being one and the same with far-Right reactionary organisations and movements. Jew=Zionist or Muslim=Islamist... according to the likes of the UAF, Muslims, and people living under Sharia law are one and the same with the regimes and the Islamic movement that is repressing them and that they are struggling against."[6][7] Peter Tatchell has similarly condemned UAF for its silence on Islamism.

Amongst the Islamic extremists to have been involved with UAF is Michael Adebolajo, who later became one of the murderers responsible for the 2013 Woolwich attack. Adebolajo delivered a speech at a UAF rally in 2009, although this does not appear to have been officially endorsed by the organisation.

The group has also been accused of ignoring antisemitism.[8] In 2008 a UAF leaflet attacking the BNP was put out describing the Holocaust as an incident in which "thousands of LGBT people, trade unionists and disabled people were slaughtered" - strangely enough, no mention of Jews. Granted, this may simply have been sloppy writing, but some have pointed to the leaflet as evidence that the antifascists responsible were sweeping antisemitism under the carpet.[9][10]

UAF has inevitably also been "criticised" by its main targets, the BNP and EDL, who have come up with such witty epithets as "Unite Against Freedom".[11] Supporters of these and similar groups have a tendency to use "UAF" as a blanket term for just about anyone who opposes them, even those who are not actually involved with UAF.

Some of their demonstrators have been arrested for violence after attacking members of right-leaning groups, up to and including the police.[12]

When a 2009 BNP festival was accompanied by an anti-fascist protest organized partly by UAF, nineteen protesters and one BNP member were arrested; four people were charged.[13] At a March 2010 EDL rally 75 people were arrested; according to the Independent, at least 55 of them were thought to be UAF counter-protesters. Most were released without charge, although Weyman Bennett was charged with conspiracy to organize violent disorder, a charge later dropped.[14]

At a protest against BNP leader Nick Griffin's controversial appearance on Question Time, believed to be held largely by UAF members, three protesters were arrested and three police officers injured.[15] One of the arrests was Martin Smith, a UAF national officer, who was convicted of assaulting a police officer.[16]

Assault on woman at Tower Hamlets[edit]

At an EDL protest in Tower Hamlets on 3 September 2011 a bus carrying 44 EDL supporters was attacked by counter-protesters.[17] A video posted to YouTube shows the bus pulling away, revealing a woman lying on the ground behind it. A group of people then approach the woman, at which point the video becomes too blurry to make out what happens.[18] It was later revealed that the woman, named Joanne Dickens, was kicked in the head while lying on the ground and sustained a broken jaw.[19]

"Welcome to Ben and Anthony's second anti-fascist update of the day."
"The EDL bus drives through, but unfortunately for it, all the protesters blocked its path and threw bottles at the windows. The emergency door opens, of the bus, the most horrible, tattered scrote of a woman gets out, gesticulates wildly, before someone comes along and punches her in the face."
"...Do carry on."
"So, after she was punched in the face she fell to the ground. The emergency door closes, of the bus, it goes on, leaving her bewildered and isolated on her own, picks herself up on her feet, staggers along, before someone comes up behind her and just kicks her up the arse."
"So, what would you say about the male law - never ever hit a woman - if it's a tattooed, horrible, EDL lady? What's your opinion?"
"Never, ever hit a woman - but they're not women."
"Never hit a woman, but do kick a dog?"[20]

This conversation takes place amongst much laughter and good cheer. The 'Anthony' involved later apologised;[21] whether or not either he or the cameraman were affiliated with UAF is unclear, but the organisation did endorse the counter-protest.[22]

In 2011 UAF lobbied for a ban on a proposed EDL march in Tower Hamlets, an area which has a large Muslim population; home secretary Theresa May went on to ban all protest marches — including UAF ones — for a period of thirty days across Tower Hamlets and neighbouring boroughs.[23] Hilariously, UAF responded by stating that they "welcome the banning of the racist English Defence League's (EDL) march through Tower Hamlets" whilst objecting to being banned themselves, stating that "This is a huge attack on everyone's civil liberties... It is our human right to peacefully march in Tower Hamlets."[24][25]

In 2014, London Black Revolutionaries received a plethora of threats from Weyman Bennett over the phone, ranging from the threat to dismantle and “go to war” on their organisation if they continued to “ignore the leaders of the movement” and secondly, if they ever organise events within Anti-Racism, that they must be obliged to speak to SUTR/SWP. Secondly, veiled threats were received to make individuals known to the police if they continued to host the first statement made on the situation at 26/11/14 1:00am & additionally, that the police had stated to SUTR that LBR's demonstration would need heavy policing as it appears to be friction between the two demonstrations.

"Nazi scum off our streets"[edit]

The UAF in official statements use a variety of argumental fallacies, including most notably otherism, moral panic and fear mongering. The Socialist Workers Party background of some UAF members means they commonly use slippery slope arguments about fascism at UAF events although this can't be said for UAF generally.