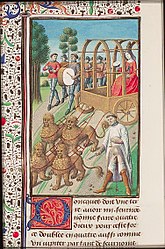 A rather fanciful depiction of Origen's castration

Origen of Alexandria (or Origen Adamantius (c. 184 or 185–c. 253 CE) was an astonishingly prolific writer in the early Christian church, who may owe some of his success to allegedly having his nackers nicked. He is recognised as one of the Church Fathers

and as one of the top theologians of the early Church; he turned a bunch of random ideas and writings into an internally-consistent doctrine that would enslave large parts of the world for millennia.[1][2][3]

Like many teenagers, Origen wished to be martyred to ease the monotony of life as an adolescent in a world before the Sex Pistols and Riverdale. Born into a Christian family, after his father Leonidas was martyred in 202, he planned to rush out and confess to authorities that he was a Christian, in the expectation of being executed. However, his mother prevented this by hiding his clothes so he couldn't go outdoors.[4] Instead he took up an early version of the straight edge lifestyle, rejecting meat and alcohol in favour of Bible readings and study at the Catechetical School of Alexandria.[1] He reportedly fasted twice a week (inventing the 5/2 diet) and owned no shoes.[4]

The historian Eusebius (c. 260–c. 340) claimed that Origen paid a doctor to castrate him so that he could teach young men and women without being accused of sexually abusing them; not an approach which caught on in the Roman Catholic Church, unfortunately. This was reportedly influenced by Matthew 19:12 which quotes Jesus as saying "there are eunuchs who have made themselves eunuch for the sake of the kingdom of heaven". However, there is doubt over whether this story is true, perhaps because nobody was willing to check. Origen supported himself by teaching and copying texts, neither of which required a penis.

With the aid of Ambrose of Alexandria, who supplied him with a team of secretaries, Origen was able to launch into an extraordinarily busy program of writing theology. He was influenced by various pagan and semi-pagan thinkers, including Plato and later Platonists like Philo of Alexandria, and he studied under the pagan philosopher Ammonius Saccas. While arguing against Gnosticism, he saw that the Gnostics were better than Christians in actually having a consistent body of doctrine rather than just a bunch of random letters and texts. Therefore he set out to construct a systematic body of Christian knowledge in his many writings.[2]

After his death, the doctrines of the Christian church developed, and various people claimed that Origen was in fact a heretic. Epiphanius of Salamis in the 4th century was the first person to try and have Origen retrospectively declared heretical. Pope Theophilus of Alexandria denounced Origen as a heretic in 400, largely to appease a rioting mob of heterodoxical Alexandrians who believed contra Origen that God had a literal corporeal body that he could walk around in (despite this concept itself being contrary to church thinking, Theophilus was uninterested in being killed by a rioting mob and skeptical that God, corporeal body or otherwise, would physically intervene to save him). In the 6th century, Origen was again condemned by various Orthodox leaders, in part over a dispute over whether monks should be largely contemplative and reflective, as Origen believed, or more into labours and scourging, as others preferred. As a result, many of his works were destroyed.[1]

Amongst his more controversial ideas was a rejection of eternal punishment in Hell; he believed that all souls would eventually achieve salvation, even the Devil.[2] While a nice idea, this wasn't terribly popular with a religion that depends upon tightly controlling access to the gates of Heaven.