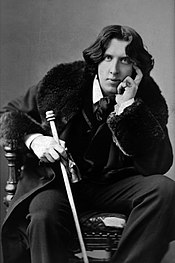 Oscar Fingal O'Flahertie Wills Wilde (16 October 1854–30 November 1900) was an Irish writer who wrote in English and French. His works include one novel (The Picture of Dorian Gray) and numerous plays, poems and short stories for adults and children. He became renowned in London as a wit.

A hedonistic dandy, Wilde liked to posture as a member of the idle rich but in fact was very hard-working, as shown by the fact that he had his first and only novel The Picture of Dorian Gray published within the same year that two of his plays (Lady Windermere's Fan and The Importance of Being Earnest) were performed in the West End. Wilde was a chain-smoker and gave a speech after the premier of Lady Windermere's Fan with a cigarette in his hand, which shocked the audience only slightly less than his egoistic speech:

Wilde was bisexual and is known to have enjoyed sex with men, despite being married with two sons and having been in love with a woman at Trinity College. After becoming infatuated with Lord Alfred "Bosie" Douglas, he began frequenting rent boys. Wilde's relationship with Bosie drew the ire of Bosie's father, John Douglas, 9th Marquess of Queensbury, a prize-fighter (wrote the rule book) and virulent homophobe with a reputation for violence throughout London. After the death of his eldest son, Douglas, despite being a self-proclaimed atheist, viewed his son's death as a judgement upon his younger son, Bosie, and wrote an abusive message to Wilde, calling him a "Posing Somdomite" (sodomite: he wasn't very well read). Wilde prosecuted Douglas for libel, leading to a court case in which Wilde's book The Picture of Dorian Gray was brought forward in evidence due to homosexual subtext between the characters of Dorian Gray, Basil Hallward, Lord Henry Wotton and Alan Campbell. 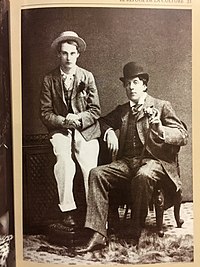 In 1895, Wilde was convicted of 'gross indecency' with other men (a euphemism for homosexuality) and imprisoned for two years, most of which he spent in Reading Jail. It was after this imprisonment that he wrote The Ballad of Reading Gaol and the apologetic De Profundis, Latin for "From the Depths". After Wilde's incarceration, Bosie Douglas distanced himself from him and claimed to have been "corrupted" by him, even being self-righteous enough to write a denunciation of Wilde, piously entitled In Excelsis ("In the Highest"). Bosie was also suspected of being an antisemite. Nevertheless, soon after Wilde's release, the two of them reconciled and lived together in Paris with Wilde adopting the pseudonym "Sebastian Melmoth" (a reference to a gothic novel of which Wilde was fond) to protect himself from homophobic attacks. Wilde lived in poverty in Paris and claimed "Like dear Saint Francis of Assissi, I am wedded to poverty however in my case, the marriage is not a success."

Wilde was diagnosed with cerebral meningitis on 25 November 1900. Before his death, he drank a glass of champagne with his friend and former lover Robbie Ross, claiming, "I am dying as I have lived: beyond my means." After waking from a nightmare, he told Robbie, "I dreamt I was dining with the dead" prompting Robbie to respond "Oscar, I'm sure you were the life and soul of the party." Wilde died on 30 November 1900. His last words are reputed to have been "This wallpaper and I are fighting a duel to the death — eventually one of us has to go." The wallpaper won.

Wilde was originally buried in the Cimetière de Bagneux outside Paris, but he was moved to Père Lachaise Cemetery in 1909. The epitaph on the tomb is taken from Wilde's poem The Ballad of Reading Gaol:

And alien tears will fill for him,
Pity’s long-broken urn,
For his mourners will be outcast men,
And outcasts always mourn.

Ex-pat American sculptor Jacob Epstein carved one of the world's greatest funerary monuments, placed in one of the world's best known cemeteries, Paris' Pere-Lachaise, "The Tomb of Oscar Wilde". The controversy surrounding this work of art did justice to Mr. Wilde. 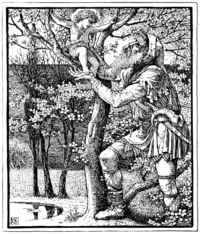 Wilde was raised as a Roman Catholic by his mother, Jane Francesca Agnes, Lady Wilde, and considered himself a Roman Catholic throughout his life, although he was only baptised on his deathbed. Despite being a self-proclaimed individualist, Wilde wrote in favour of socialism,[2] although it is often suggested he was a (left-wing) anarchist.[3] Certainly, he celebrated individualism as well as socialism, saying "Art is individualism, and individualism is a disturbing and disintegrating force. There lies its immense value. For what it seeks is to disturb monotony of type, slavery of custom, tyranny of habit, and the reduction of man to the level of a machine."[2]

He was also sympathetic to Irish nationalism and has become celebrated as a nationalist hero, despite the contradiction between Irish Catholicism and homosexuality.[4] His beliefs were perhaps influenced by his mother Jane, who was a prominent Irish nationalist.[5]

Wilde probably said or wrote some of the following things at some point.