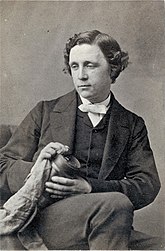 Charles Lutwidge Dodgson, known under the pseudonym Lewis Carroll, (27 January 1832–14 January 1898) was a 19th century British author, artist and mathematician best known for his fantasy stories Alice's Adventures in Wonderland and Through the Looking Glass, the latter of which included several poems such as "Jabberwocky" and "The Walrus and the Carpenter", as well as his poem "The Hunting of the Snark".

Carroll is also responsible for much of the groundwork on modern logic, mathematics, number theory and cryptography that would be later expanded upon by contemporaries and followers (such as Charles Babbage and Alan Turing), providing the foundations for modern computing and efficient mechanization.

Above and beyond their fantastical natures, Carroll's Alice stories are replete with subtext and social commentary, particularly about the politicians (such as Queen Victoria and Benjamin Disraeli) of the time. Carroll also puts a heavy amount of number theory, game theory and boolean algebra into his work.

Part of Carroll's writing style, particularly in his poetry, was the use of nonsense words to describe appearances and actions of fantastical creatures. Many of the words he invented were portmanteaux, such as "chortle" as a combination of "chuckle" and "snort". Because of the popularity of his poetry, some of these made-up words made it into the English vernacular on some level or another — including "chortle", and the word "vorpal" (which has no etymological explanation but otherwise describes the sword which decapitates the Jabberwock), which is well-known among fantasy gamers. Some recent critics have pointed to Carroll's poetry being influenced by his study of Old English (i.e. Anglo-Saxon, Beowulf-era) verse. This style was unfashionable at the time, but Carroll was a contemporary of the more "academically successful" poet Gerard Manley Hopkins' similar study.

The Mad Hatter's poem in Alice's Adventures in Wonderland about a tea tray in the sky[notes 1] is likely the inspiration for Bertrand Russell's celestial teapot.

The possible drug use that occurs in Alice's Adventures in Wonderland, particularly the foodstuffs labeled "eat me" and "drink me" as well as the Caterpillar who smokes from a hookah, appear in many modern poems and songs, such as Shel Silverstein's "Alice" and Jefferson Airplane's "White Rabbit". Many of the images invoked by the Alice stories suggest LSD[notes 2] trips and are popular among the ganja crowd.

In the beginning of the movie Dogma, the angel Loki suggests to a nun that the poem "The Walrus and the Carpenter" is a commentary on how organized religions deceive and destroy their followers. This viewpoint is not shared by most historians and literary critics, who suggest that sometimes a children's poem is just a children's poem, and not everything Carroll wrote had a deeper meaning. In the context of the movie, Loki made the argument solely to "fuck with the clergy".

The use of the phrase "down the rabbit hole" from the title of the first chapter of Alice's Adventures in Wonderland, has since been used more broadly in the English language to refer "to a situation that is strange, confusing, or illogical, and often hard to escape from."[1] It is usually used pejoratively for people espousing loony ideas, but in the case of QAnon, it was either self-pwned (or perhaps Poe's law) in one QAnon map.[2]

1858 photograph by Carroll of 6 year-old Alice Liddell dressed as a beggar.

Recent feminist historians have suggested that Carroll may have been a pedophile, as evident by his interest in his friends' children and his use of cameras, a new technology during his lifetime, to photograph young girls. Carroll experts are quick to handwave these implications, stating that his interest in young girls was purely for inspiration — for example, the character of Alice in his stories is based on Alice Liddell, the daughter of a family friend. Carroll did in fact take photographs of young girls, sometimes semi-nude — however, this was a style of art at the time, on canvas as well as on film, and Carroll was certainly not the only one.

During the course of research for a BBC documentary about Carroll that was first broadcast in 2015, new evidence came to light that suggested the writer may have been sexually attracted to minors. A photograph was discovered in the archives of a French museum. It shows an uncomfortable-looking pubescent girl in a full-frontal nude and highly sexualized pose. Text which accompanies the photograph says that the girl in the picture is Lorina Liddell, Alice Lidell's elder sister, and that it was taken by Lewis Carroll. It has, however, not yet been definitively proven that Carroll either did or did not take the picture.[3]

Since there were no reported incidents of pedophilia, and Carroll's relations with his family friends appeared to remain unsoured, the most that can be said is that if he was a pedophile, he repressed any sexual urges he might have had.

From time to time, claims have been made that Carroll was anti-semitic. This is based on the fact that his book Symbolic Logic includes suggestions for establishing a logical premise that to modern ears seem racist. However, the oft-quoted "(a) All Juwes [sic] are greedy" in fact refers to characters from the mythology of Freemasonry. Modern publications of his works retain these statements, with a disclaimer in the preface explaining the desire to not censor his work for the sake of historical accuracy.

However, the general issue has been comprehensively refuted by two Jewish authors, Morton N. Cohen in his life of Lewis Carroll[4] and Benjamin Ivry.[5] They point to his anger when it was suggested that, in his distribution of free copies of his books to children's hospitals, he should exclude a Jewish hospital.

Lewis Carroll was also accomplished in photography. Here is some of his best: