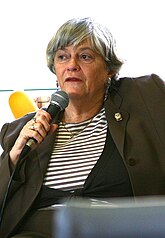 M.C. Widdy, about to drop the most fire public school prayer of 2005.

Ann Noreen Widdecombe (born 4 October 1947) is a former British Conservative politician and has been a novelist since 2000. She is a social conservative and a former member of the Conservative Christian Fellowship. She retired from politics at the 2010 general election. Since 2002 she has also made numerous television and radio appearances, including as a television presenter. She is a convert from Anglicanism to Roman Catholicism. In 2019 she returned to politics, winning a seat in the European Parliament for the Brexit Party.[2]

As an MP, Widdecombe was known for opposing the legality of abortion, her opposition to various issues of LGBT equality such as an equal age of consent and the repeal of Section 28, her support for the re-introduction of the death penalty, the retention of blasphemy laws and her opposition to fox hunting. More recently, she has attracted attention for her views on conversion therapy and belief that science may one day find a "cure" for gayness.

Her career should've just died after Hitchens and Stephen Fry demolished her in a debate. sigh

A Catholic convert from an Anglican family, Miss Widdecombe is fiercely anti-abortion and, famously, a virgin (or, in typical conservative conciseness, "a publicly-acknowledged practitioner of abstinence") and IRL Cat lady

(they all have ridiculous names). She has threatened to sue anyone who dareth to say she is not a virgin maiden.[4]

Widdecombe is a practising Catholic. She converted in 1993 after leaving the Church of England.[7] Her reasons for leaving the latter were many, as she explained to reporters from the New Statesman:

In 2010, Widdecombe turned down an offer to be Britain's next ambassador to the Holy See, being prevented from accepting by suffering a detached retina.[9] She was made a Dame of the Order of St. Gregory the Great by Pope Benedict XVI for services to politics and public life on 31 January 2013.[10]

in an Intelligence Squared debate in which they defended the motion that the Catholic Church was a force for good. Arguing against the motion were Stephen Fry and Christopher Hitchens;[note 2] the crowd agreed with the latter two.[11] (Available in all its glory on YouTube).[note 3]

Widdecombe has been described by Conservapedia as "a strong campaigner for family values",[5] by Terry Eagleton as "one of the country's moralists-in-chief",[13] and by The Guardian staff as "a matronly and proudly traditionalist figure on the Conservative benches".[14] Her moralism on society has been seen by some (such as Eagleton) as hypocritical, given the views she takes, as she allegedly blames the public for issues caused by a systematic failure of the policies she promotes.[13]

She was the guest host of news quiz Have I Got News for You twice, in 2006 and 2007.[15] Following her second appearance, Widdecombe vowed she would never appear on the show again[16] because of comments made by panellist Jimmy Carr. She wrote, "His idea of wit is a barrage of filth and the sort of humour most men grow out of in their teens.... [T]here's no amount of money for which I would go through those two recording hours again. At one stage I nearly walked out."[17] Sadly, she did not follow through with her latter claim. And – although she had very kind words for him – Paul Merton

At one time, Widdecombe branded all of television "filth"[20] (which is somewhat ironic, given that TV is the only reason most people know Widdecombe), so it's not surprising she has expressed support for a new Mary Whitehouse, although she has said she would not do it "for all the tea in China",[21] which is a hell heck of a lot of tea!

Old Widdybobs has been consistently in firm opposition against any form of LGBT equality. In 2000, with regards to the repealing of Section 28 and the introduction of an equal age of consent for homosexual and heterosexual intercourse, she said: "I do not believe that issues of equality should override the imperatives of protecting the young",[14] presumably because with the repeal of Section 28, predatory queers will take your kids and make them gay? I mean, how else would the Bill have been about "protecting the young"?

Widdecombe is opposed to abortion, stating that it was "not just a religious belief" which "has nothing to do with sexual morality, or religion, or anything else", she views abortion as murder and says that and that "some of my best work against abortion was done when I was an agnostic."[23] (Yes, apparently there was a time!)

which made changes to laws regarding abortion and stem cell research,[24] as well for allowing those darn sodomites and lesviots to be both named on their child's birth certificate.[25]

Widders takes a concern in animal welfare, and pressed the Conservative–Liberal Democrat coalition government for major reform with regards to animal testing.[26]

In 1990, following the assassination of the Conservative politician Ian Gow by the Provisional Irish Republican Army (IRA), the Eastbourne by-election for his seat in the House of Commons was won by the Liberal Democrat David Bellotti. Upon the announcement, Widdecombe told the voters that the IRA would be "toasting their success".[27]

In 1996, Widdecombe, as prisons minister, defended the Government's policy to shackle pregnant prisoners with handcuffs and chains when in hospital receiving antenatal care. Widdecombe told the Commons the restrictions were needed to prevent prisoners from escaping. "Some MPs may like to think that a pregnant woman would not or could not escape. Unfortunately this is not true. The fact is that hospitals are not secure places in which to keep prisoners, and since 1990, 20 women have escaped from hospitals". Jack Straw, Labour's Home Affairs spokesman at the time, said it was "degrading and unnecessary" for a woman to be shackled at any stage.[28][29]

In 1997, during the Conservative leadership election of William Hague, Widdecombe spoke out against Michael Howard, under whom she had served when he was Home Secretary. She remarked that "there is something of the night about him". The remark was considered xenophobic and antisemitic by some (Howard is of Romanian Jewish descent) and was extremely damaging to him; he was frequently satirised as a vampire thereafter.[30] He came last in the poll. Howard went on to become party leader in 2003, however, and Widdecombe then stated, "I explained fully what my objections were in 1997 and I do not retract anything I said then. But this is 2005 and we have to look to the future and not the past."[31]

In 2001, when Michael Portillo was running for leader of the Conservative Party, Widdecombe described him and his allies as "backbiters". She went on to say that, should he be appointed leader, she would never give him her allegiance.[32]

In 2019 she attracted further controversy for comments that one day science could find "an answer" to homosexuality and allow gay people to become straight (like reparative therapy, which is widely criticised and despised).[33] If she wants to go that route we hope science will have found a way to remove people's homophobia and extreme right-wing political beliefs before then.