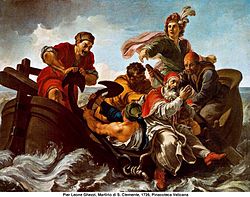 Clem (in the Santa Claus suit) is sent down to Davy Jones' Locker.

Pope Clement I (said to have died in 99 CE), otherwise Saint Clement of Rome, was according to Roman Catholic tradition one of the earliest Bishops of Rome, commonly known as Popes.[1] Virtually nothing is known about him, if he existed, but he traditionally wrote a letter saying that Rome is top dog in the Christian Church, which makes him very important, particularly to the Roman Catholic church.

Traditionally he was a freed slave of Titus Flavius Clemens (consul)

but there is no evidence for this and it is no longer believed. Fourth century apocrypha says that he was exiled by Emperor Trajan to work in a quarry and miraculously produced water to quench the thirst of his fellow workers. This is apocryphal. Nothing is known of his life.[1]

He may have been martyred by being tied to an anchor and thrown in the Black Sea, although many sources fail to mention this striking event, and most people now suspect it was a different Clement.[1] In the 9th century Saint Cyril (of alphabet fame) allegedly brought his bones from the Crimea to Rome, although as no anchor was attached this can't be considered canonical.

Pfft. Although numerous writings are attributed to him, even Christian theologians believe only one letter is genuine. He is mentioned by several of the Church fathers, notably Tertullian (writing around 200 CE), and Eusebius and Jerome, who lived even later, but this is considered by Christians as sufficient evidence that he existed. Clearly somebody wrote the letter: something stating "Rome is tops" wouldn't just appear in Rome for no reason.

Clement is known for what is supposedly his letter 1 Clement, written to the church at Corinth to defend some dismissed presbyters (elders or figures below bishops in the hierarchy). The epistle is not included in the New Testament, but it must have been a near thing. It is generally dated between 80-140 CE, with the typical estimate 95-97 CE. However, both Thomas J Herron and Richard Carrier point out there is internal evidence that the work was written before 70 C.E.[2][3]

In fact, 1 Clement 41:2 acts like the Temple is intact: "Not in every place, brethren, are sacrifices offered continually, either in answer to prayer, or concerning sin and neglect, but in Jerusalem only; and even there the offering is not made in every place, but before the temple in the court of the altar, after that which is offered has been diligently examined by the high priest and the appointed ministers."

It is also significant as evidence for the existence of Paul of Tarsus, praising his patience and referencing one of his epistles. It recommends charity, humility, penance, etc, and reminds people of the coming resurrection. But historically it is most important for his arguments that show the pre-eminent authority of Rome in the early Christian church. Hence it is as much political as theological.

, and 2 essays on virginity.[1] Eusebius in the 4th century cast doubt on the 2nd epistle and other writings, as none of the older church fathers had mentioned them, suggesting a recent date of composition.[4] The 2nd epistle suggests the importance of salvation by works (saying that just worshipping the Lord is not enough), and tells people to reject the earthly in favor of the next life.[5]

And he is the hero of a 4th century novel, the Clementine literature, Clementine Recognitions, or Clementine Romance (now attributed to Pseudo-Clement because they are known to be much later than the actual Clement). These tell a somewhat exciting adventure story, where Clement meets the prominent early Christian Barnabas and hangs out with Saint Peter and has wacky adventures while Peter argues with the magician Simon Magus

who claims to be able to turn himself into a goat. The text is ostensibly addressed to James, brother of Jesus (James the Just), who knew Peter in Jerusalem.[6]

The Fifth Epistle is particularly notorious, as it is often taken as an argument for the abolition of private property. It was probably written by a 9th-century monk and forger who is known as Pseudo-Isidore

(because he also wrote various works that claimed to be written by Isidorus Mercator, Isidore the Merchant, but weren't). It draws on an earlier, also fraudulent, work purportedly by Clement, the 3rd century Recognitions. The earlier work describes a philosophical debate in which a Greek philosopher (erroneously claimed to be Plato) expressed ideas that "all things should be in common amongst friends. And unquestionably amongst 'all things' spouses are included." Pseudo-Isidore twisted this in his fabricated fifth epistle to suggest that Clement supported anarcho-communism and to claim that the early Christians practiced common ownership of property in Jerusalem; it was included in Canon Law in the Decretum Gratiani

and the document was not proven a fake until the 16th century. The historian Norman Cohn suggests it was important to radical movements in the Roman Catholic church in the late medieval era such as the Brethren of the Free Spirit and Jean de Meun's satirical poem Roman de la Rose.[7]

This is one of the places where you wonder if the majority of so called bible history "scholars" were repeatably dropped on their heads as babies when it comes to consistent use of the Historical method as they will point to a passage in Mark as evidence it was written after 70 CE and yet in about the same breath ignore 1 Clement 41:2 which efficiency shows that work was written before 70 CE. It doesn't even make sense from a historical prospective as an earlier date would lend more credence to a historical Jesus then a later one. Never mind none of them come up with an intelligent reason for someone writing in the 90s as if a temple destroyed some 20 years before was still intact.